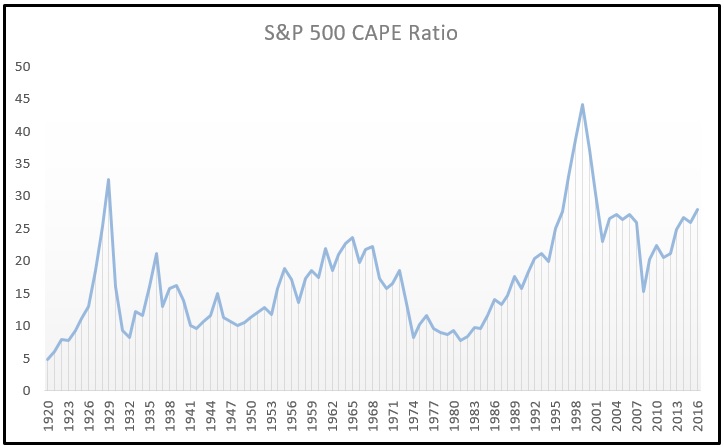 For that reason, this newsletter issue will take another look at potential corporate tax reform, and how it may or may not impact the market. The CAPE ratio was already moderately high for the last few years because we’ve entered what is most likely the late phase of the current market cycle (as we’re about 8 years into the so-far third longest market expansion in US history, with 10 years being the longest ever), but entered its recent spike in valuation as a result of the US presidential election with its promises of tax reform and deregulation, which has propelled the S&P 500 up about 10% in a few months.

(FYI, for regular readers; I had to skip the March newsletter issue due to a variety events, including my home being flooded and other things to deal with.  So, this is the sequel to February’s newsletter, and you didn’t miss anything.)

Quantifying the Impact of Corporate Tax Cuts on the Stock Market

The likelihood of corporate tax cuts occurring during this administration with a GOP majority in Congress is high. Lower corporate taxes means higher after-tax corporate income, which offers a degree of optimism for market indices to hit record highs. In some sectors, such as energy and finance, deregulation could also have a large impact on corporations’ bottom lines.  Depending on your political point of view, there could be other good or bad outcomes of this policy, but those topics would be outside the scope of this newsletter.

The market has most likely risen in part due to expectations that these will occur. And in this newsletter I’m looking at this from an investor’s perspective, not from a political point of view.

Currently, the United States has a 35% statutory federal corporate tax rate for companies that make more than a few million dollars in income. This includes most publicly traded companies, so both large-cap and small-cap companies are generally in this bracket. On top of that, state corporate tax rates range from 0-12%, averaging about 4-5%.   That puts the combined tax rate, at least on paper, at around 39-40%.

The Trump administration, and the majority leaders in Congress, have instead proposed federal tax rates of 15-20%, along with a degree of simplification in the tax code and the potential removal of some credits and deductions. Obama had proposed 28% during his presidency, but this was not passed as it was not considered low enough of a reform.

The recent inability for Congress to pass health care reform may have reduced the scale that they will target with tax reform. We might indeed end up seeing something like 25% or 28% rather than the initially targeted 20% or less.  Time will tell.

From an investor perspective, should this even factor into our plans? If Congress and the president cut corporate tax rates from 35% to 25%, or 15%, or fails to cut them at all, should we adjust our portfolios in response?  Should we adjust them in anticipation for such cuts?

In my opinion, no.

Here’s why.  The federal tax rate on paper is 35%, but the average rate that profitable US corporations actually pay is already under about 20-25%.

All of these reports are recent (2016-2017), but they look at data with a bit of a delay, like at 2012 or earlier where they have a pretty complete picture of what occurred.

If corporations truly paid 35%, then the potential of tax reform could have a massive effect on after-tax corporate earnings. For example, if a company pays 35% in federal taxes, and that figure is decreased to 20%, that would represent an increase in after-tax income of 23%, since the company keeps 80 cents per dollar earned rather than only 65 cents.  If market valuations were to remain steady, that would lead to a massive 23% increase in stock prices.

However, since the effective federal rate is already at 14-22% or so depending on what measurement you go by, the impact that tax cuts will have on earnings will be lower. For example, if the effective tax rate were to drop from 14% to 9% for profitable corporations, this would translate into a boost of less than 6% in after-tax income as companies keep 91 cents on the dollar rather than 86.

Now in some sectors, like finance, deregulation could have a massive impact on earnings. The stock of Goldman Sachs, for example, increased nearly 40% to its peak after the election, and has since declined to being just 25% over its pre-election level. Investors are expecting big changes here.

But in many sectors, it will be business as usual, perhaps with a slightly lower effective tax rate. In fact at this point, with the market up 10% compared to the night of the election, I’d say there’s more to lose in the market if tax cuts don’t materialize in the way investors were expecting, compared to how much we stand to gain should tax cuts take place.

A final few aspects to consider have to do with specific aspects of the tax code. Currently, for example, share repurchases are slightly more tax efficient than dividends, because with dividends you have to pay the tax each year, while share repurchases are indirectly taxed through capital gains only when you sell the stock, which means you get to defer the taxes for as many years as you choose to hold the stock, and compound that money in the meantime. If dividend or capital gains rates change significantly for individual investors, it could alter the types of investment strategies that work the best, or could alter company behavior as they try to keep taxes minimal. This probably won’t be a significant change and would only be worthy to comment on after any such changes have materialized.

Each issue, I’ve been updating two virtual portfolios for the newsletter; one that invests in individual stocks and virtually any type of investment, and one specifically for ETFs to keep it simple.   Many of these security selections overlap with my real-money personal portfolio selections.

I’ve decided to simplify the process a bit for this newsletter and beyond. The ETF portfolio will remain the same, and I will continue to track it virtually. For the stock portfolio, however, I will instead show what investments I’m currently holding in real life.  There’s so much overlap between my actual investments and that portfolio, that it makes more sense to just show what I’m holding rather than maintaining a virtual one that is almost the same anyway.

A significant portion of my money is in index funds, and I have a comfortable cash position, but for a variety of reasons, I also hold stakes in individual stocks, precious metals, and occasionally MLPs. The reason for this is to focus on specific sectors and on selling options, and to include additional asset classes outside of the scope of a typical Vanguard-style index fund.  This is not meant to be a sample of a complete portfolio; it’s meant to round out a position in index funds.

Overall it’s been doing well.  The one negative outlier over the past couple months is Qualcomm, which has had poor stock performance lately due to a lawsuit by Apple. 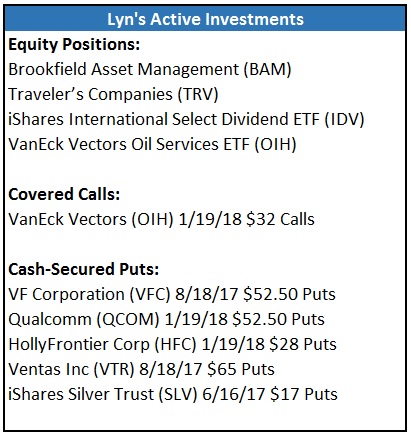 This virtual portfolio provides a fairly diversified example set of investments, and sells options (cash-secured puts and covered calls) based on market valuations to protect capital.

There have been no significant changes here this month. IDV recently paid a nice $225.75 dividend for those shares. The cash-secured puts for RSP and VNQ expired out of the money, which were profitable investments and now have opened back up for further investment.

-I bought back the options for GLD and SLV, because they had gone down to virtually zero thanks to appreciation in those metals. I used that money to sell more put options as shown in the above table. The GLD option was $1.99/share, and the SLV option was $0.41/share.

The next newsletter issue will likely be in June.  Have a wonderful spring!