For underlying GDP growth, this is the best graphic I’ve found that illustrates the current U.S. market expansion: 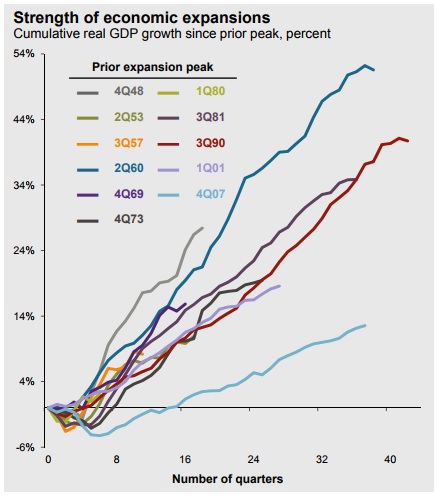 It shows the length and magnitude of every post-WWII business cycle.

What it demonstrates is that the current expansion, in light blue, has been the third longest, but also one of the weakest in terms of core growth.

Unfortunately, I think that with high stock valuations, the tiebreaker goes to the bears.  Valuations are high based on cyclically-adjusted price-to-earnings ratios, price-to-book ratios, the ratio of market capitalization to GDP, etc.

Market values are ahead of economic growth:

Even if we have continued growth for a while, U.S. stock market valuations as a whole are so high that strong returns over the next 10-20 years are unlikely.

We’re not in true bubble territory yet, but we’re at the higher end of the valuation spectrum.  And there are some specific bubbles building in the economy that will bite us hard whenever we have our next recession.

While markets are surging at relatively high valuation levels, individual investors have smaller cash positions right now than they’ve had since the market top in 2000: 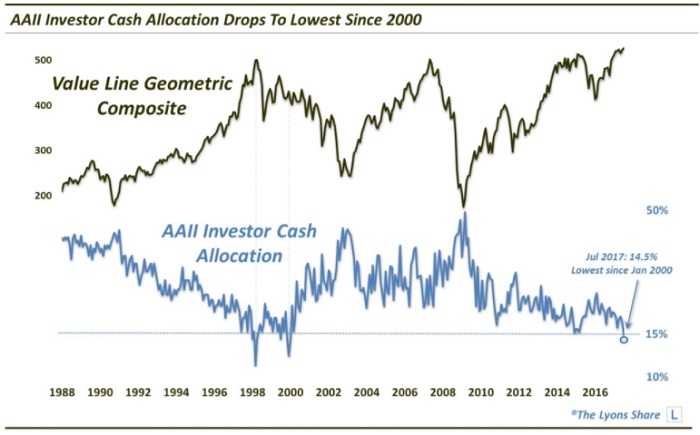 Source: Data from AAII, charted by The Lyons Share

Meanwhile, Bloomberg shows that billionaire investor Warren Buffett has been doing the opposite and hoarding cash, nearly tripling his stockpile from $37 billion to $100 billion over the last four years:

It’s well-known that he saves up cash during late phases of a bull market, not because he’s trying to time the market, but because he simply can’t find good bargains with things so expensive.  But when a correction or recession hits, he goes bargain-shopping and clears out his cash reserves.

That little cash dip he had in the first quarter of 2016 was because the market had a mild dip and he deployed a bit of cash to buy things.

With investors not flush with cash, and with substantial margin exposure on the books, and with corporations not as able to buy back their shares with more debt as they were over the last few years, there’s a limited amount of levels to pull for the market to keep going up.  But we’ll see.

One thing I constantly ask myself is- “what has already gone down?”

The United States constitutes about 42% of global market capitalization, and the rest of the world accounts for the other 58%.

But according to CNBC, U.S. investors only have an average of 15% of their portfolios in international markets.

This is the CAPE ratio of every major market in the world, courtesy of Norbert Keimling of Star Capital. Red is expensive, blue is cheap: 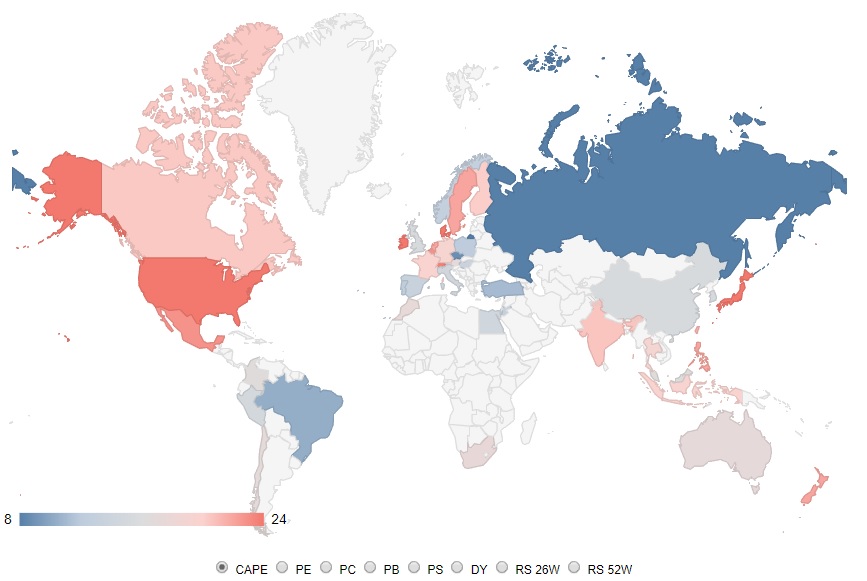 You can also look through them by price-to-book ratio, dividend yield, and other metrics.

But by ALL of the valuation metrics, the U.S. is expensive compared to other countries and compared to its own historical standards.

Developed international markets and emerging markets have vastly underperformed over the last decade.  Emerging markets in particular are cheap by most metrics.

Here’s the performance of the United States compared to international developed markets and international emerging markets over the last decade: 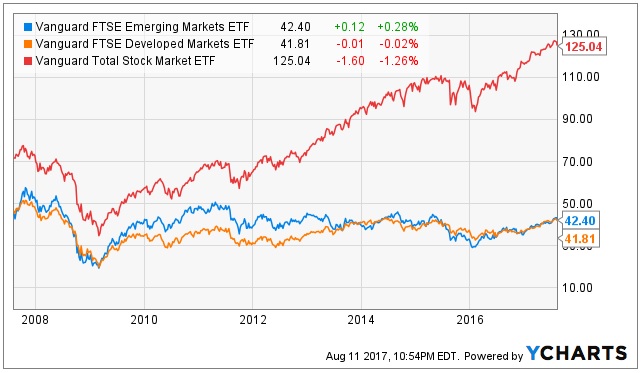 Long story short, I don’t know what will happen over the next year or so, but I’m in the process of increasing my international exposure towards those cheaper markets rather than into America’s expensive market.  I’m also increasing my cash position.

I’ll still be holding a big position in U.S. equities, but only for about half of my portfolio value.  I don’t try to time the market, but rather just want to hold reasonably-priced investments.

However, I don’t particularly like normal international index funds, for reasons stated here.

So, in addition to my primary international index, I hold an international dividend ETF (ticker: IDV) that increases my exposure to the UK and Australia and balances my international investments more evenly, avoiding over-concentrating in any one country.

In addition, I recently bought shares in a Singapore ETF to get direct exposure to that cheap market.  My Brookfield investments have considerable emerging market exposure, especially in Brazil, and I bought a Brazil ETF as well to get additional exposure there.  Not in large amounts, just to avoid concentrating as heavily as the international indices do in China.

For further reading of why I’m buying emerging markets, and Brazil and Singapore in particular, see this updated article:

And to see why I have a large stake in Brookfield, and my overall approach to international investing, see here:

The short answers are these:

I can’t give any definite forecasts, but I think this is a good time to check your international diversification to make sure it’s in line with your goals.

I’m going to publish detailed articles on some international ETFs in the coming month.

Although they’re few and far between, there are some reasonably-priced equities in the United States as well. 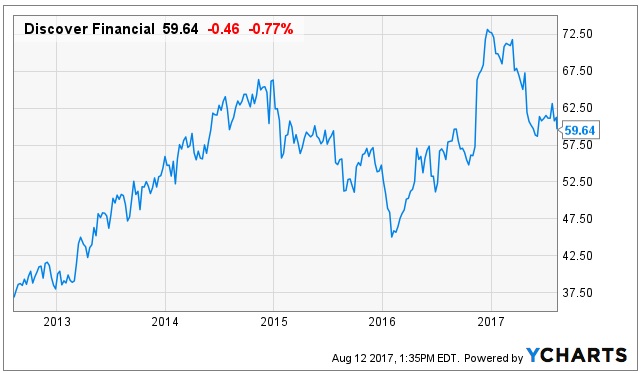 Discover owns the third-largest credit card network in the United States, and the fourth-largest globally.

They’re the highest in customer satisfaction among credit card issuers due to their strong investment in customer service and mobile app development.

Over the last decade they’ve been building a lean, profitable online bank, which receives deposits and makes loans.  Their credit card network continues to grow, and they are bringing in cash hand over fist.

Their CEO is excellent, and has been running the company since before it became public in 2007.  Under his leadership, Discover remained profitable throughout the 2007-2009 financial collapse.

The reason has to do with rising credit charge-offs.  Across the industry, consumers have a mild uptick in the inability to pay their credit card debts, which may be an early sign of weak consumer finances that may lead to a recession.

Here’s a chart from the Federal Reserve June 2017 Stress Test, which shows what percentage of their loan portfolio each major financial institution is estimated to lose should we encounter a recession as bad as the one from a decade ago: 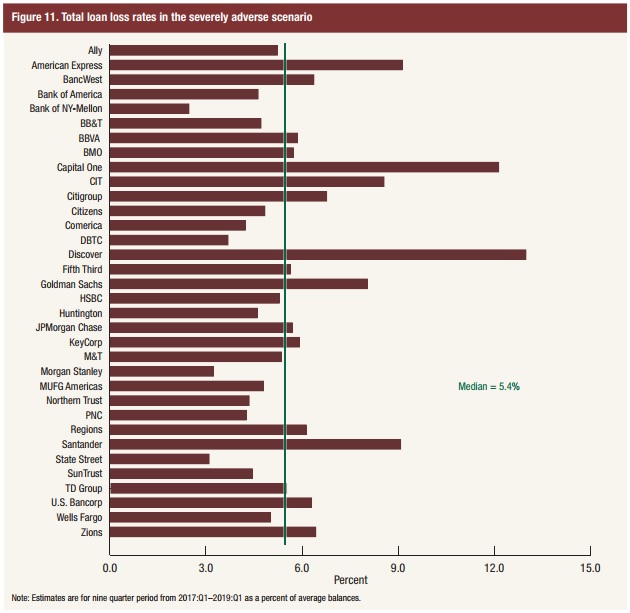 As you can see, Discover would have the highest losses.

This isn’t due to sloppy finances.  They’re actually one of the most conservative underwriters.  The reason that Discover (and American Express, a major Warren Buffett holding) have such high loan losses is because they are concentrated in credit card lending, which historically does the worst in recessions compared to other types of loans like mortgages.

Banks with little exposure to loan losses, like State Street and Bank of New York Mellon, currently have higher stock valuations.  And diversified, conservative banks like U.S. Bancorp are also a bit pricey.  But Discover is giving investors jitters, and is very lowly priced.

Meanwhile, Discover passed the Fed’s stress test with flying colors.  They have plenty of cash reserves to take a hit even of that magnitude.  They proved this resiliency in practice during the 2008 financial crisis as well.

Discover is taking advantage of its cheap stock price by buying back their cheap shares.  In fact, they’re buying back about 2% of their market capitalization every quarter.  At this rate, their share buybacks and dividends alone can give investors 10% annual returns, not to mention any growth that the company will likely experience.

I’m buying Discover because, unlike the rest of the market, a lot of concern is already factored into the stock price, and it’s a great underlying business.  It’ll be a volatile ride, and yes their stock price will likely take a beating during any recession we may face, but over a 5-10 year period Discover is well-positioned to give strong returns from his price point in my opinion.

If, during some market correction Discover drops into the $40’s or lower, I’ll back the truck up and buy more.

For a more detailed analysis of Discover, see my article here.

The oil price crash of 2014-2017 has hurt energy stocks while the rest of the market has been strong. 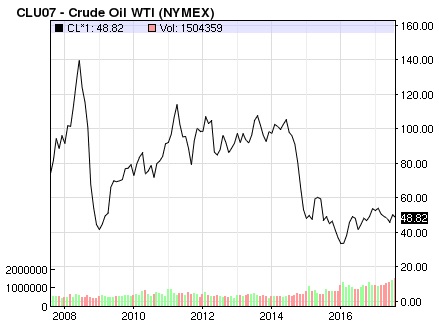 With that in mind, I’m currently bullish on these two midstream infrastructure plays:

You can click on those links to read my full analysis of each of them.

The summary is, both of them have declined in price lately, but they fully cover their current distributions even with low energy prices, neither of them have to pay incentive distribution rights (IDRs) like most other master limited partnerships do, and they have the strongest balance sheets in the industry.

They’re the most conservative choices in a difficult sector.

They do have risks of course, but they’re in an industry that has already faced a major collapse and have survived it well.  I wouldn’t go overboard into the MLP space, but if you want yield, it’s a place to find some gems in the rubble.

In addition to holding a diversified set of automatically re-balancing index funds in my primary retirement account, I hold these investments in my other accounts: 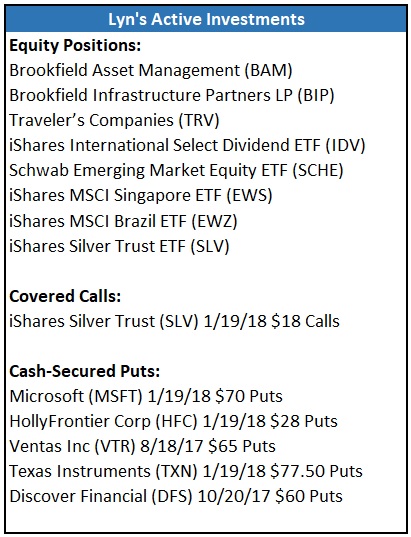 V.F. Corporation:  Back during my February newsletter, and in this article, I gave the argument that V.F. Corporation is undervalued, and I went long via cash-secured put options.

This was lucky, because the outcome moved more quickly than I anticipated. I don’t time the market at all, and only look for long-term values, but the very day I published that article (red arrow, February 7th) was the turning point: 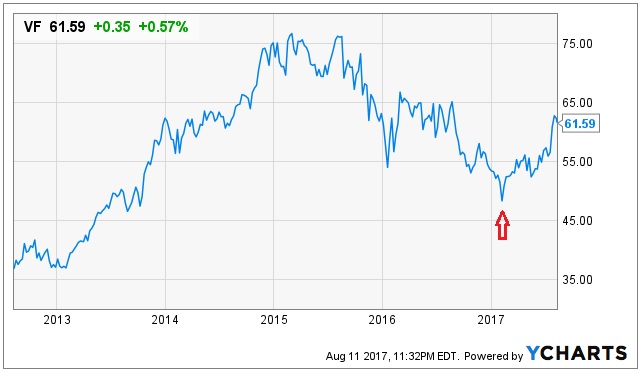 As a result, my options were very profitable, and were not exercised, and therefore I no longer have a long position in V.F. Corporation.  I’ll continue to watch the stock to see if it presents another profitable buying opportunity like in February.

VanEck Vectors Oil Services ETF:  I exited this position with a small loss to invest in more attractive places.

Brookfield Infrastructure Partners: This was to get more global infrastructure exposure and a strong distribution yield.  I previously owned them from 2010-2015, and have now re-entered a position.  Read more here.

You can see the previous version from the June issue here. 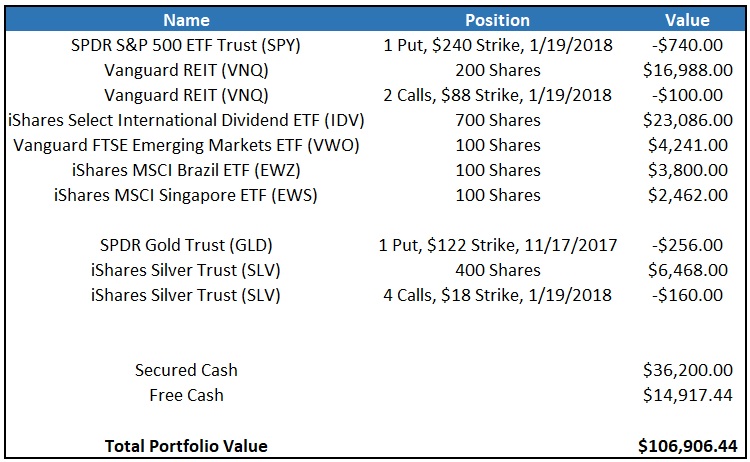 The two SPY puts expired profitably without being exercised.  I’m selling a single cash-secured put option for SPY at a strike of $240 to continue some SPY exposure.

The GLD put expired profitably without being exercised.  So I’m selling another put for GLD at a strike of $122.

The SLV puts were exercised, and the portfolio now owns 400 shares of SLV.  I’m now selling a covered call on SLV at a strike of $18.

I use a free tool called Personal Capital

to easily keep track of all my investments across all my accounts.

Suppose, like me, you’ve got index funds in a retirement account, then other investments in your IRA, then maybe a taxable account, etc.  With overlapping funds from different accounts, it can be annoying to keep track of how much money you actually have in each asset class.

With Personal Capital, you can see a complete picture of your financial situation: 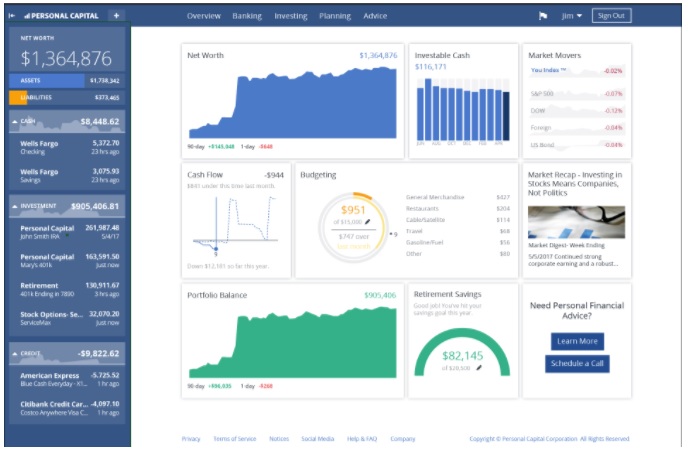 I plan for the next newsletter issue to come out in about six weeks.  Enjoy the rest of your summer!