Right now, earnings season is winding down, with most major corporations having recently reported their results for the second fiscal quarter of this year.

According to CNBC, out of the hundreds of S&P 500 stocks that reported quarterly results by the mid-point of the earnings season in late July, the average revenue increase compared to last year’s quarter was a strong 8.6%. Earnings have increased by 22.4% on average, with 7-8% of that being due to the corporate tax cuts passed last year.

However, several tech names seriously lagged. Facebook, Netflix, and Twitter, all with high-flying valuations, had 15-20% stock price declines because their reports and forward estimates weren’t good enough to justify their high valuations to investors.

But the stock market in general is still priced to perfection: 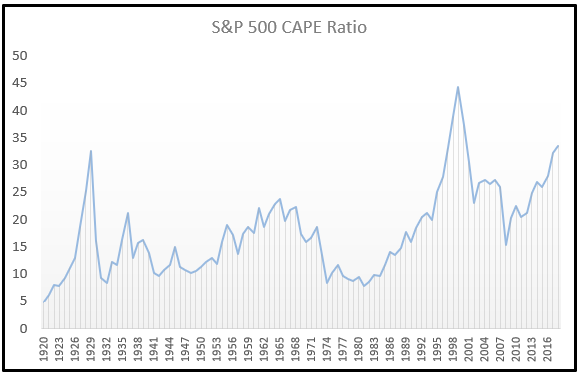 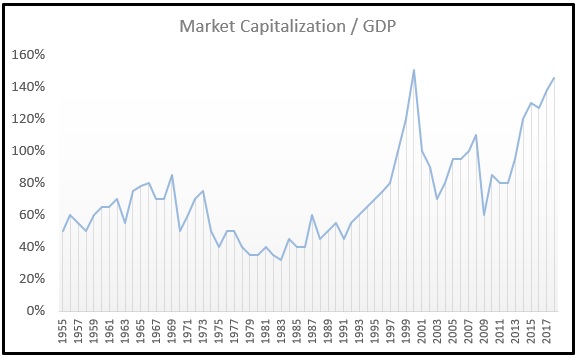 Whether you measure stock valuations by CAPE ratio, Market-Cap-to-GDP, Price-to-Sales, Dividend Yield, or other metrics, U.S. stocks are rather pricey compared to their historical averages.

Corporate tax cuts, record levels of share buybacks, and low interest rates have justified high valuations for a while, but all of these factors are temporary or one-time events.

Afterall, corporations have taken advantage of years of low interest rates to issue cheap debt and buy back shares to accelerate EPS growth, but now their debt levels are stretched, indicating that there’s only so much more leverage they can take on: 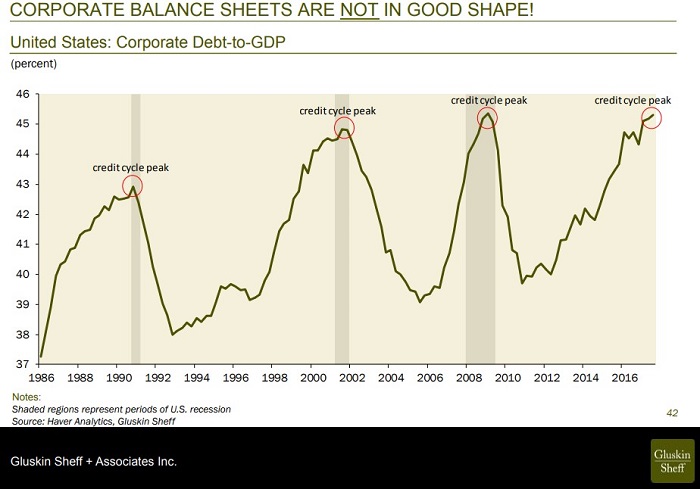 Should Investors Time the Market?

The most common question I get in email from readers is that investors are concerned about high stock valuations and how long this market expansion has continued, and how to protect capital next time we have an inevitable bear market and recession.

After all, at over nine years in length so far, we’re in the second longest economic expansion in United States history, and about one year short of becoming the longest one ever. The next section of this newsletter provides an overview of current recession indicators, evidencing how close or far we may be from the next one.

But there are a few schools of thought on balancing a portfolio over the course of business cycles like this.

One school of thought is that investors shouldn’t touch their portfolios at all. They should stay invested in diversified index funds, never try to time the market, and ride out any storms. This is supported by how few money managers beat the S&P 500.

In addition, a diversified portfolio historically bounces back rather quickly:

After the financial crisis in 2008, the worst U.S. recession in modern history, a portfolio of 40% S&P 500 stocks and 60% bonds recovered to its peak level in just two years. A portfolio with 60% stocks and 40% bonds took three years to recover, and a 100% stock portfolio took four and a half years to recover.

Most people can wait out a few years with a diversified portfolio, and most recessions have not been as severe as this, meaning that a normal recession recovers faster.

The second school of thought is that investors can re-balance their portfolios more tactically, taking market valuations and recession indicators into account.

With this approach, investors anticipate market declines based on clear signs of overvaluation and indications of being late in a business cycle, and position themselves more conservatively before a crash when stocks are expensive. Then when stocks are cheap after a crash, a portfolio should be more heavily-weighted in equities. When this tactic is backtested, it results in superior rates of return and less volatility.

The problem with that approach is that people end up being too conservative. The average money manager, for example, marginally outperforms the S&P 500 during bear markets (because they protect some of the capital), but then majorly underperform during bull market recoveries, because they stay positioned too conservatively.

And, if you start protecting your portfolio too early, and a recession comes a few years later than you expect, you will often miss a few 20% gain years, so that when the market does fall by 30% or more, the fact that you missed a few major positive years already overshadowed the fact that you protected your capital during a bear market.

Plus, moving money around too frequently is tax-inefficient, unless the capital is all in a retirement account.

I fall somewhere in the middle. I don’t ignore market timing altogether, but I don’t move too much money around based on market conditions. Instead, I dial my portfolio around gradually, and continue to invest in things that seem reasonably priced.

As I explained in this article, the best thing investors can do is find out what investing strategy works for them personally- what is well-evidenced, what they enjoy, what makes them save and invest more, and what they can stick with.

In late 2016, stocks were getting expensive. I started dialing back my equity exposure just a bit, from like 85% to 75%, because indicators of economic strength were still strong. The year of 2017 ended up being a big bull year anyway, with stocks getting even more expensive, so I’m glad I stayed mostly invested. It took another year (until early 2018), for a significant market correction (10%) to occur, and even then it didn’t wipe away positive 2017 returns.

In addition, because I invest in both index funds and individual stocks (mostly dividend-payers), there’s usually something of value to buy. For example, the 2015 oil price crash created a buying opportunity for blue chip pipeline companies, railroads, and oil/gas stocks. The early-2018 REIT declines created a buying opportunity (and higher yields) among the best blue chip REITs.

At current prices, I’m bullish on Enbridge Inc (ENB), Enterprise Products Partners (EPD), Brookfield Infrastructure Partners (BIP), Ventas (VTR), Discover Financial Services (DFS), Lazard Ltd (LAZ), and other stocks. Yes, they will have big stock price dips whenever we do have an inevitable contraction and bear market, but they are currently priced well for long-term performance in my opinion.

So, how far away are we from a recession? That’s the million-dollar question, right? 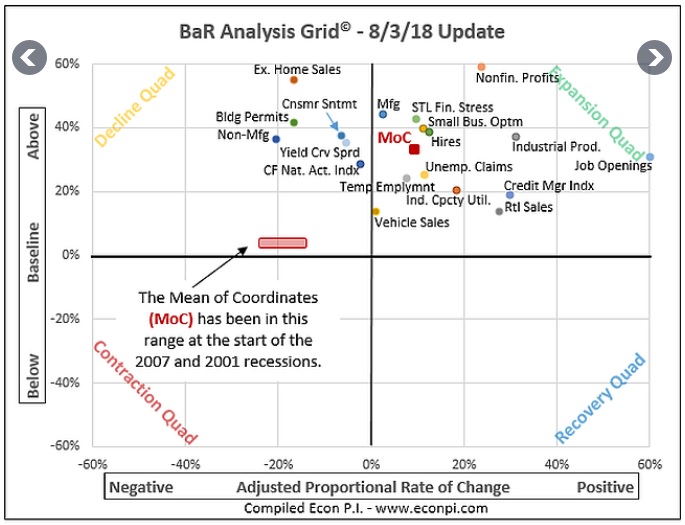 In a typical business cycle, the variables rotate counter-clockwise around the four quadrants, but not necessarily smoothly.

The current chart shows that, based on these 19 variables, we are still comfortably away from a recession. You can see that the mean of coordinates (MoC) is still in the top right quadrant, while the MoC is historically in the top left quadrant imminently before a recession.

For example, here is what things looked like one month prior to the 2007 recession: 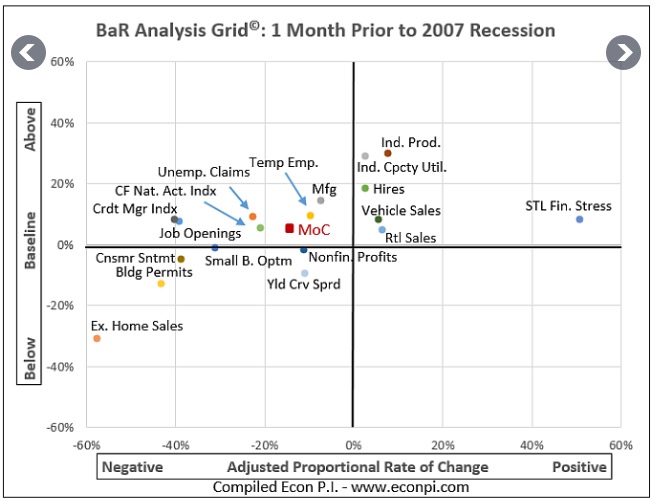 It’s important to realize, however, that a stock market decline usually precedes a recession. In other words, the stock market typically hits a peak and begins declining several months before a recession officially begins.

If there’s one shortcoming with David’s extremely useful chart, it’s that it weights all 19 variables equally. Some recession indicators are potentially more reliable than others.

For example, in the 2007 recession snapshot, several variables were still expanding. The leading variables, meaning the ones that first entered recession-mode, were existing home sales and the yield curve.

As the Fed continues to increase interest rates (two more rate hikes are expected in 2018), and the yield curve is flattening, the markets are worried about the yield curve inverting. Banks make their money mainly by borrowing at short-term rates and lending at long-term rates, so when the curve inverts, banks have less incentive to lend, and capital can dry up.

The good news is that, at least historically, the yield curve inverts several months or even a year or more before the official start of a recession, usually ahead of the stock market peak.

The bad news is that despite its historical reliability in the United States, it’s not necessarily a universal recession signal. In Japan, for example, where interest rates and economic growth are permanently super-low, the yield curve flattens before recessions but doesn’t quite invert anymore.

Housing is another major variable to watch.

This summer, housing demand has weakened: 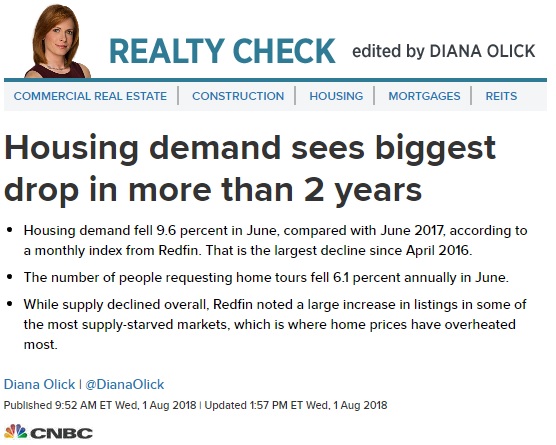 Housing prices have gotten high and mortgage rates are gradually rising, which is straining consumers’ ability to buy first homes or upgrade to bigger homes.

Housing sales could rebound and push higher, although with valuations as high as they are, I’d be a little bit surprised. (Then again, prices of anything can always surprise.)

Right now, the ratio of U.S. household net worth to disposable income is at a record peak:

Housing prices have grown faster than household incomes. Stock valuations have outpaced corporate earnings. Bond prices are high; yields are low. Most things are quite pricey.

This makes it harder for consumers to buy a house, and less desirable to invest in stocks in general. Pretty clear indicators of being fairly late in the business cycle, albeit with most recession indicators showing that a recession is still not imminent.

My primary retirement account is purely indexed, and currently consists of about 40% U.S. stocks, 20% international stocks, and 40% short-term bonds and cash.

From 2009 through 2016 it was more aggressively positioned in equities that enjoyed a long bull market, but in 2017 I began dialing back my equity exposure a bit due to high valuations. I’ll significantly increase my equity exposure if/when valuations decrease substantially.

In addition, I have two other accounts that I make more active investments in, including individual stocks, ETFs, and options. Here is their combined summary: 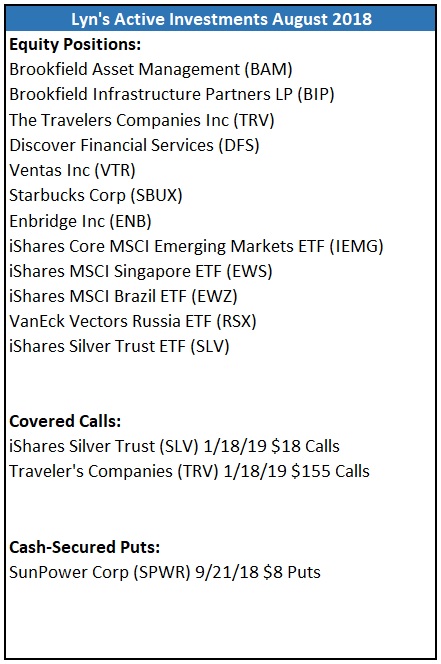 , which makes everything easy.

Changes since the previous issue:

-My cash-secured puts on Intel and Synchrony Financial both expired profitably, resulting in nice gains, so I’ll likely be reinvesting that money in the coming month.

-I sold shares of IDV to increase cash levels and likely invest in other dividend opportunities.

-I bought additional units of Brookfield Infrastructure Partners (BIP). You can read my analysis of the business and why I increased my position here.

It takes a few minutes per newsletter to manage, and helps show where I think value is in the market without focusing on individual securities. 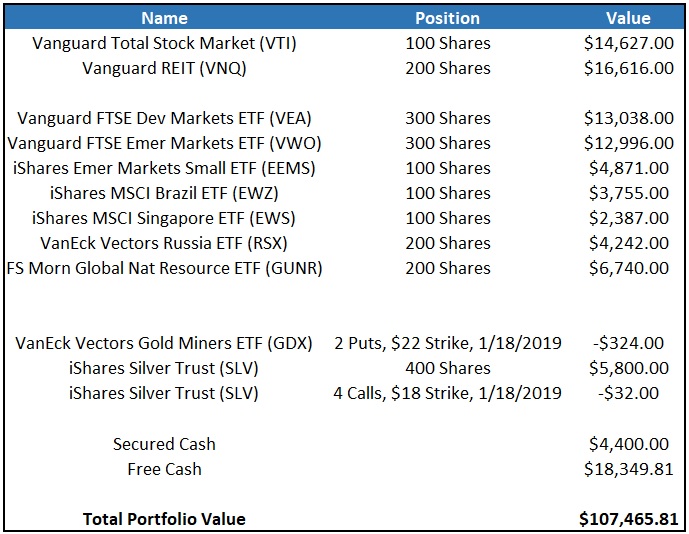 With stocks, bonds, and housing all at expensive valuations, a degree of conservatism is warranted.

It’s at a time like this, when things are still going strong and we’re high up in the business cycle, to make sure your financial house is in order.

That being said, I’m still dollar-cost averaging into the market. Blue-chip REITs, blue-chip MLPs, certain financial companies, and certain foreign markets are still reasonably priced. It’s a fine time to buy things that already encountered a bear market, rather than things that are at peak valuation.

The 2018 Global Opportunities Investment Report will be available for one more week while the data are still fresh. This was published in June, and compares valuations, debt levels, growth metrics, and other indicators among 29 investable markets around the world. If you’re interested, check it out now.

Enjoy the rest of the summer,