September 2021 Update: Now that BlockFi has reduced its interest rates, the risk/reward situation has changed and I no longer hold BTC there, after making a significant amount of interest. BlockFi’s rates are now very low for any BTC balances over 0.1%. Yields remain decent for stablecoins, and the rewards card remains a compelling product.

Several months ago, I began exploring the lending ecosystem around bitcoin and other digital assets, and in particular found BlockFi to be interesting.

This article explores how that works and what the risks and rewards are, mainly from a depositor’s perspective as a way to earn yield.

The short version here is that people can earn 8.6% on cash deposits and 6% on bitcoin deposits, although it’s not without risk. I use it myself for a small portion of my assets.

BlockFi is a digital asset lender that engages in a variety of borrowing and lending practices across multiple assets.

They’re the blue chip in the digital asset lending industry; the big one that is based in the US, meets a ton of regulations, and has a clean operating history over the past few years since their inception.

Here are their main lines of business: 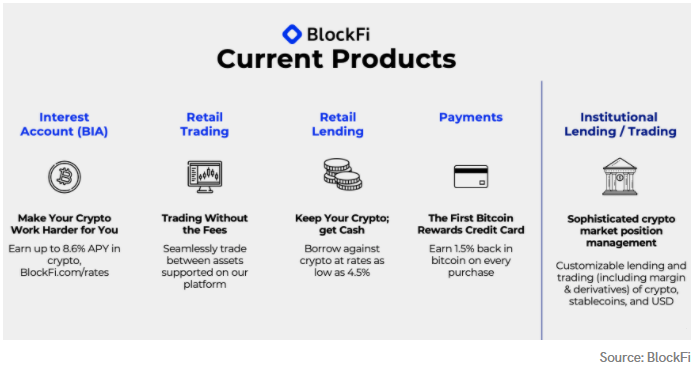 They also have an option where you can have all of your interest on multiple asset types paid in the token of your choice, whether it’s bitcoin or stablecoins or one of the others. So for example, you can deposit bitcoin and get all your interest paid in dollar stablecoins.

There are plenty of people out there that are very “bitcoin rich” and don’t want to sell and incur capital gains taxes, but need some liquidity. Maybe they want to put a down payment on a house, for example.

One of the options available to them is that they can use some of their bitcoin as collateral for a dollar loan. For example, if someone has 50 bitcoin that they bought long ago at lower prices, and wants to take out a loan, they can send 10 bitcoin over to BlockFi to hold as collateral, and take out up to 50% of the value of that bitcoin in dollars.

BlockFi is rather protected against losses in that scenario, because bitcoin would need to fall over 50% and stay down for the collateral to be less than the value of the loan. And as it goes down and hits certain thresholds, the company issues margin calls and liquifies portions of the collateral as needed.

A number of institutions want to borrow bitcoin or other tokens, usually for short periods of time. They might be exchanges, funds doing arbitrage activities, etc. BlockFi will assess their creditworthiness and lend them bitcoin as a small percentage of that institution’s assets.

BlockFi engages in some market neutral arbitrage opportunities with things like futures, the Grayscale Bitcoin Trust (GBTC), and other ways to earn a spread without taking a long or short view of bitcoin itself.

Trading and Other Activities

BlockFi lets users buy or trade digital tokens. If you deposit cash, for example, you can exchange that cash for bitcoin, and start earning interest on that bitcoin while it remains deposited on that platform.

You can move digital assets from exchanges or wallets to BlockFi, and move them out.

The company is also in the process of launching a Visa rewards credit card that lets the user earn bitcoin on purchases.

How I use BlockFi

I have a small percentage of my bitcoin deposited at BlockFi, earning some interest at a 6% annual rate. The interest is paid in bitcoin, so my bitcoin stack is growing there. To do this, I moved some of my bitcoin that I don’t have in cold storage to BlockFi.

I also have some stablecoins deposited at BlockFi earning a 8.6% yield. These are Gemini dollars, GUSD, the highly-regulated and audited type of stablecoin backed with dollar deposits at State Street Bank. The interest is paid in the form of more stablecoins. To do this, I made a ACH deposit via cash to BlockFi, which converted the fiat into GUSD.

Finally, I have some Paxos Gold, PAXG, deposited at BlockFi earning a 5% yield. To do this, I switched some of my GUSD stablecoins on BlockFi directly to PAXG tokens. PAXG tokens are backed up by fully allocated gold stored in Brink’s vaults, and the interest I earn is paid in more of these PAXG tokens. Earning a yield on gold is pretty rare, and neat.

When I deposited these funds, I did so by considering the risk/reward against some other investments. For example, I can invest in various stocks, which I do, and I take all sorts of equity and valuation risk. With BlockFi, as a depositor I’m higher in the capital stack than an equity investor, but on the other side of the coin it’s also a smaller private business and exposure to digital tokens, so it has greater risk of solvency issues than, say, Apple.

Overall, I like my portfolio to have relatively uncorrelated risks. My combination of bitcoin, stablecoins, and Paxos gold earning a yield at BlockFi comes with a different risk/reward profile than, say, my investments in software stocks or commodity producer stocks, and when taken together, they balance out some of the risks of each other.

The downside of lenders like BlockFi is that deposits are not FDIC insured.

This isn’t a fiat bank with access to the Federal Reserve; they’re dealing with finite digital tokens that can’t be issued. It’s up to the company to appropriately manage their lending practices to avoid large losses, and in a tail risk scenario, depositors could lose funds if BlockFi’s loan book were to be heavily impaired.

I take risk pretty seriously, so I discussed BlockFi’s risk mitigation methods with one of BlockFi’s VCs, and also with BlockFi’s CEO, Zac Prince.

An entity that borrows and lends in one currency mainly has to worry about credit risk. However, an entity that is involved in borrowing and lending multiple different currencies (in this case dollars and various digital assets, mainly bitcoin) inherently has risk of some of those currencies collapsing or soaring in price relative to other currencies and thus disrupting their borrowers, which ultimately is another source of credit risk.

If bitcoin were to collapse in price faster than liquidation can occur, BlockFi’s dollar-based loans could become uncollateralized. Inversely, if bitcoin abruptly soars in price, some of their institutional bitcoin borrowers could become a credit risk in terms of paying that bitcoin-denominated loan back.

BlockFi, however, has a number of lines of defense against incurring large losses of this type that could affect the company and depositors. As a credit to their success so far, they were functioning just fine in March 2020 when assets across the globe, including bitcoin, were basically liquidated in price. Bitcoin collapsed 53% over a 1-month period, and more than that on an intra-day basis, and BlockFi functioned normally while many other lenders ran into issues and had to temporarily cease lending activities.

First, many of their loans are collateralized 2x or more with pre-defined margin call points and liquidation points, which means assets would need to fluctuate in value by extreme amounts, and with very poor liquidity, for BlockFi to face an issue for those types of loans.

Second, for institutional borrowers, BlockFi emphasizes large creditworthy firms that have diverse operations, and their bitcoin loan is only a small portion of their equity. In most cases, the amount by which bitcoin would have to skyrocket very abruptly would need to be immense in order to cause loan defaults to BlockFi by those borrowers.

Third, BlockFi avoids lending too heavily to any one customer, so that they would need multiple of those large institutional customer failures, or a thorough and sudden collapse in bitcoin resulting in mass insolvency of retail borrowers, to begin to encounter company-wide risk.

Lastly, BlockFi depositors are high in the capital stack. If the other four lines of defense were to fail due to serious loan impairments and liquidity problems, the equity owners of BlockFi would get wiped out before the depositors do. Based on the last valuation round, BlockFi has equity worth over $3 billion. In the event of a solvency problem, that company equity serves as a buffer- the executives and investors would all get their investment wiped out before depositors lose money.

There have been some sketchy lenders in the industry that ran into solvency issues, but BlockFi is operating in the regulated institutional way that should make that sort of event quite unlikely, although certainly not impossible.

If you’re going to take on counterparty risk with funds, I’d recommend sticking to the blue chips in the industry like BlockFi. The company has over 400 employees, of which dozens are dedicated specifically to managing credit/financial risk.

Most importantly for risk management, I wouldn’t recommend putting too large of a portion of your funds into BlockFi or any lender for deposit.

One of the key attributes of bitcoin is that it can be self-custodied in cold storage, which makes it free of leverage or counterparty risk. Especially as bitcoin goes through its adoption period, I think that is where the bulk of someone’s stack should be. The majority of my bitcoin is in cold storage. As the saying goes, “not your keys, not your coins.”

For example, I think some of the Bitcoin-focused accumulation platforms like Swan Bitcoin are ideal for most people for a core position. You can do one-time buys or dollar-cost average in, and automatically send the purchases to any self-custody solutions that you set up.

However, I think a smaller part of a stack can be used to earn some interest, and that’s where a place like BlockFi can be useful as well.

This is similar to how I view gold as an investment. A portion of a gold stack can be physically held as disaster insurance. Another portion can be vaulted at places like Brinks. A more liquid portion could be held as ETFs, or invested in gold mining or royalty companies. These different activities take on different levels of risk and come with different return and liquidity profiles.

Maintaining bitcoin in self-custody cold storage with seed backup or multi-signature security solutions is about as safe as you can get, down at the bottom of the risk spectrum if you know what you’re doing. Above that, some people feel more comfortable using a custodian, which takes on counterparty risk to some extent. And above that, some people don’t mind using a portion of their stack to take on some lending risk to potentially earn a bigger stack over time.

I think self-custody is an important part of a bitcoin allocation, but I also like exploring the ecosystem and putting a small portion of my bitcoin to work.

So, I’ve got a small part of my bitcoin stack deposited at BlockFi, high in the capital stack of a well-regulated business to earn a 6% yield. It comes with both risk and reward, so it’s important to be aware of the risks.

In addition, I have some of my dollars and gold allocation deposited there, earning a 8.6% yield and 5% yield respectively.