The core of my investing approach has been focusing on ETFs and blue chip stocks for fifteen years now, which I then augment with some trading in other asset classes around the edges.

More specifically, I complement my blue chip stocks with international ETFs, cash/bonds, precious metals, a few small stocks, and occasional option trades. For example, I like to take advantage of various crashes that happen around the world from time to time, whether it’s Brazil’s major 2014 recession or the sudden oil price crashes of both 2015 and 2018.

But generally, core blue chip stocks don’t require much time or energy to maintain. I like to think of it as pruning the garden now and then.

This article describes the characteristics I look for in a blue chip stock, and then lists three I like right now. These are some of the more interesting stocks for 2021 in my opinion, for those that plan to hold for a long time.

How to Find the Best Blue Chip Stocks

Blue chip stocks are large recognizable businesses that are market leaders in their industries, and they are often (but not always) rather diversified as well.

They get their nickname from blue poker chips, which tend to be high-value chips in the game. 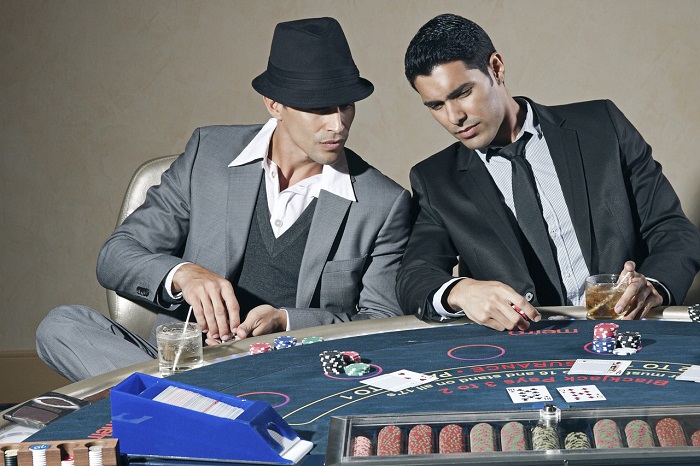 Many people think of blue chip stocks as safer but lower-returning companies, and while there can be truth to that stereotype, it’s not how I approach it.

As I showed in my article on equal-weight investing, mid-cap stocks have been the best-performing segment of the U.S. stock market over the past four decades. Equally-weighted large cap stocks are also near the top of the performance list.

Smaller companies are highly variable. Some members of the group have absolutely explosive gains as they break out and become mid-cap or large-cap companies. However, there is a high failure rate, and many of them go bust. The good ones also tend to trade for high valuations.

Larger companies are less variable. They’re already so big that they are less likely to have explosive gains, but they also tend to have lower failure rates.

The sweet spot for risk-adjusted returns, in my experience, is mid-cap stocks or the smaller range of large-cap stocks that have three key quality criteria:

A company’s return on invested capital (ROIC) is its annual operating income with taxes removed, divided by its invested capital. This is a more accurate measure than return on equity (ROE), because it cannot be gamed with high leverage.

It’s a general rule of free markets that if a company begins to achieve excessive returns (high ROIC), other companies will try to compete and get some of that action, which then drives down the return on invested capital in that industry closer to the weighted average cost of capital (WACC).

However, some companies are able to develop economic moats around their business that keep competitors at bay and allow the company to generate superior ROIC for decades, with a wide gap between their ROIC and WACC. These economic moats include prime real estate locations, network effects, high switching costs, patents, cost advantages, trusted brands, and oligopolies.

A blue chip stock in my opinion is better-judged by how wide its moat is, rather than based on size of the company. This is more of an art than a science, but the key quantitative indicator of a moat is a consistently high ROIC for long periods of time.

For more reading on this subject, there’s an excellent article on Forbes by David Trainer that goes into ROIC in detail, describing how it’s an under-followed metric but that companies that focus on it tend to outperform.

What constitutes a “good” ROIC varies by industry. Successful software companies tend to have sky-high ROIC because their cost of capital is so low. Commodity producers tend to struggle with low ROIC because they have little or no control over the price of their product and yet have huge fixed capital expenditures.

For a blue chip stock, I look for a ROIC over 12%, and higher than its competitors.

High leverage can undo in a day what took a century to build.

Large debt levels can sink an otherwise high-quality company, and worsening debt metrics can be a sign of a problem, indicating that a company is losing some of its luster. For this reason, I turn down many popular “value” stocks for inclusion in my portfolio due to ugly balance sheets more than any other reason.

During periods of turmoil, well-capitalized companies with strong balance sheets can take advantage of fallen competitors that took on too much debt, and make low-cost acquisitions or take market share.

However, it’s important to keep context in mind. Low interest rates through much of the developed world give companies an incentive to shift their capital structure more towards debt than equity, for better or worse. Different industries require very different levels of leverage to operate, so we can’t compare software to infrastructure as though they were the same business, for example.

For me, the most important debt metric is the debt/income ratio. I favor this metric more-so than debt/equity (which varies quite a bit based on how capital-intensive a business is), and more-so than the interest coverage ratio (because this ratio can lull us into a sense of complacency during periods of unusually low interest rates, which are not guaranteed to stay that way forever).

A healthy company is a growing company, but again, the metric is somewhat relative compared to industry and valuation.

A good benchmark is the nominal GDP growth rate of the company’s primary markets.

Occasionally there are exceptions, where growth is not very relevant. Some of my best investments over the past decade have been insurance companies with little-or-no growth, because their low valuations justified the stock, most of the cash went towards dividends and buybacks (thus growing earnings and dividends per share at high rates), and their lack of growth was mainly attributable to a low interest rate environment, which put pressure on their float returns.

Cisco Systems is the world’s leading provider of networking equipment and solutions.

The stock became overvalued in 2018 but after a sharp sell-off, is back at its historical average valuation: 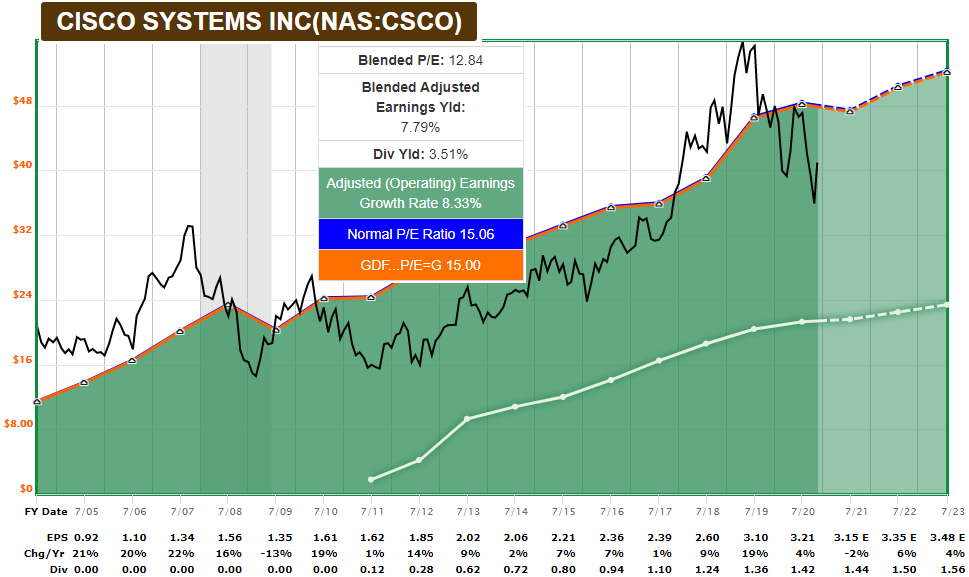 Their ROIC is usually in the double digits percent-wise in any given year, and they reached a ten-year high in 2020, with a ROIC over 20%.

Cisco has more cash and cash-equivalents than debt on their balance sheet, and they have a very high AA- credit rating. Overall, they literally have one of the strongest balance sheets in the world, probably in the top ten of all companies.

Growth is one of their more challenging metrics, though. Lately, Cisco is focusing on shifting its business strategy from one-time sales to subscription services, and focusing increasingly on software and services as a percentage of revenue. To buy Cisco products now, rather than just pay an up-front cost, you sign up for a multi-year plan so that Cisco can provide software and updates for it. So far, this is translating into ROIC improvements for Cisco.

If you want a blue chip tech stock with a 3+% dividend yield, Cisco is a pretty good choice in my opinion.

Out of the mega-cap stocks, Alphabet is one of the few I own.

They may seem expensive, and indeed they are on the top end of my fair value range, but when growth is considered, they remain reasonably-priced. 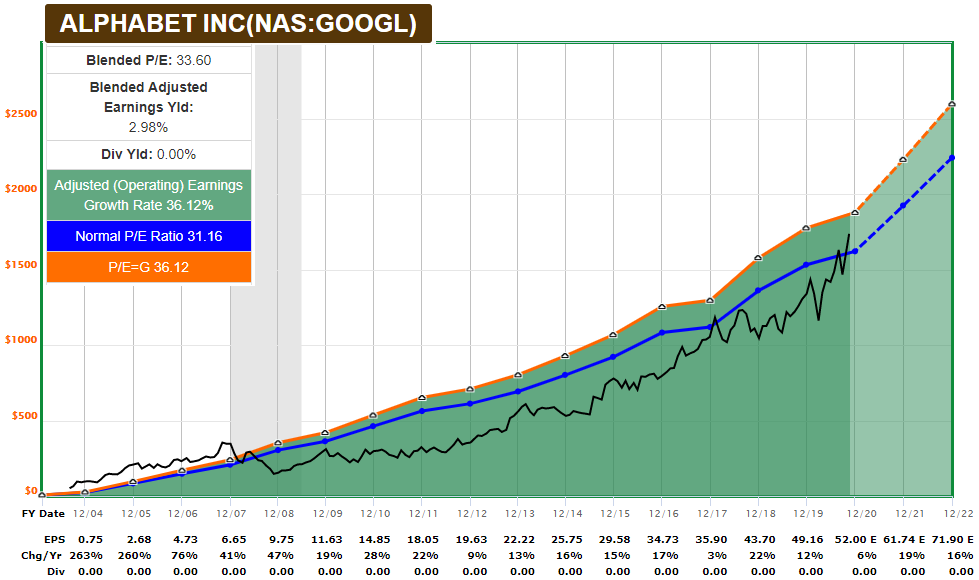 The stock has a P/E ratio of about 30 and projected annual growth in the mid-teens, which gives them a PEG ratio of around 2 or slightly less.

And if Cisco’s balance sheet is one of the top ten in the world, Alphabet’s is probably the single strongest balance sheet you’ll find anywhere. They have $120 billion in cash and cash-equivalents with just a token $4 billion in debt. They could buy several S&P 500 companies and still have half their cash left over. In fact they generate so much free cash now, and have so much cash left over, that they probably should initiate a small dividend to send some of that cash back to shareholders.

They maintain diversified portals to reach billions of people, including Google.com, Youtube.com, the Android operating system, and other apps like Google Maps.

In addition to their core advertising business which continues to take market share, Alphabet has become a leader in next-decade technology like driverless car algorithms and quantum computing.

Japan has a set of large trading conglomerates that own a variety of commodity interests around the world, and specialize in logistics. In addition, they often own other businesses, such as convenience stores or healthcare businesses.

Itochu has been one of the best-performing trading conglomerates, soundly beating the Japanese stock market and keeping up with the U.S. stock market over the past decade.

Despite this, it continues to trade for a very low valuation: 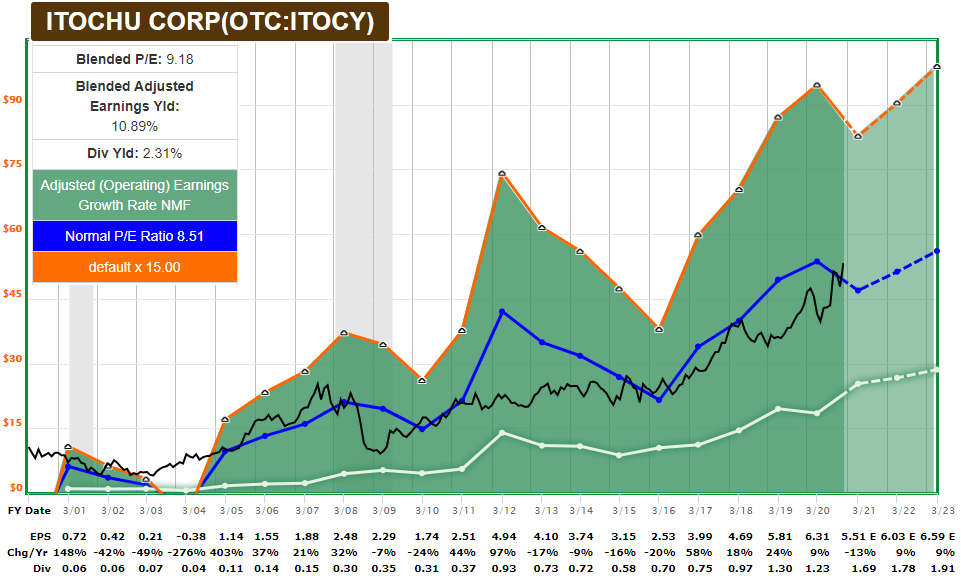 Itochu’s ROIC isn’t as high as Cisco or Google, but operating out of Japan, its ROIC is far higher than its cost of capital.

The company has been an exceptionally well-managed entity that has business interests in almost everything, ranging from coal mines in the United States to de-salination plants in the Middle East, to convenience stores in Japan.

If you liked this article, be sure to join the free newsletter. It comes out every 6 weeks and gives investors macroeconomic updates, stock ideas, and shows my personal portfolio changes.