The future is leaning towards renewable energy.

However, investing in the landscape of renewable energy companies historically tends to be very risky, due to the combination of developing technology and changing political headwinds or tailwinds.

Fortunately there are ways to reduce the risk, and even generate a lot of income, if you know where to look.

This article discusses several methods that investors can use to invest in renewable energy, including some higher-risk ways and some lower-risk ways.

According to research by McKinsey & Company, 77% of new global electrical generation capacity from now until 2050 will come from wind and solar.

In particular, their research shows:

Here’s how fast solar growth has been growing in the United States and how it’s projected to keep growing:

On a global scale, the world recently reached 1,000 gigawatts of installed capacity, with solar taking an ever-larger market share. 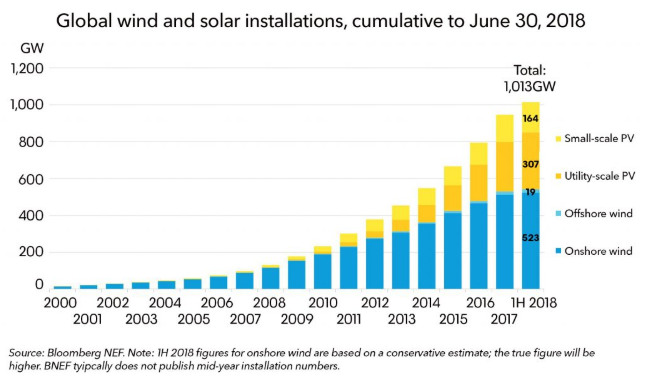 While political leaders can influence the pace of renewable energy growth by giving incentives or mandates to accelerate its use, or try their best to slow its progress, the real long-term determinant for adoption will be cost.

The price of renewable energy, and particularly solar, has declined significantly in recent years and may be plateauing at a low level:

Furthermore, many densely populated cities have smog problems, and are pushing for more electric vehicles and more electrical generation from renewable sources and natural gas, rather than gasoline-powered cars and coal for electricity generation. Especially in less-developed countries with high population density and fewer restrictions on vehicle emissions.

This is a massive multi-decade global growth story.

There are several different ways to have exposure, depending on your goals and risk tolerance.

4 Ways to Invest in Renewable Energy

One of the higher-reward, higher-risk ways to invest in renewable energy is to go directly to the source: the companies that are on the leading edge of new solar and wind technologies.

These companies usually are growth-oriented, don’t pay dividends, often have high valuations, and may or may not be profitable at the current time. They have to constantly iterate their products to stay competitive, and companies that fall behind can quickly go bankrupt.

But companies that come out ahead can really skyrocket, and the high volatility typically allows for very profitable option-selling.

For this reason, it’s not a great area for the casual investor. For someone like me, with a background in both electrical engineering and finance, I do take positions in solar technology companies from time to time and I regularly talk about one in particular within my newsletter. But still, I don’t take large individual positions due to the risk.

First Solar (FSLR) is a large American producer of utility-scale photovoltaics, and is exempt from President Trump’s solar tariffs. They have a strong global position, and utility-scale solar is the cheapest and most efficient type of solar energy production.

SunPower (SPWR) is a medium American producer of residential, commercial, and utility-scale photovoltaics, but they really shine in the residential and commercial space because they have the highest-efficiency panels on the market, which makes them good for smaller installations. They are majority-owned by French oil major Total SA.

Vestas (VWS) is a leading Danish maker of wind turbines, employing over 20,000 people with revenues of nearly 10 billion euros.

Siemens Gamesa (SGRE) is also a leading wind turbine maker. It is the result of a merger between Siemens and Gamesa, and is headquartered in Spain.

General Electric (GE) is one of the largest wind turbine makers, but because the company is so big, wind turbines only make up a small part of their revenue.

Enphase (ENPH) makes micro-inverters, which are used to convert the direct current (DC) generated by solar panels into alternating current (AC) that most electrical systems use.

A more income-focused alternative to invest in the renewable energy space is yieldcos.

A yieldco is a business that develops and owns renewable energy generation, and pays high dividends to their unitholders. In other words, rather than manufacturing solar panels or wind turbines, they buy lots of solar panels and wind turbines and build utility-scale power generation assets.

NextEra Energy Partners (NEP) is a leading holder of solar and wind assets in North America, and is part of the NextEra Energy (NEE) umbrella of companies. NextEra is one of the largest and lowest-cost providers of electricity in the United States.

Brookfield Renewable Partners (BEP) primarily holds hydro dams globally (especially in South America), but is diversifying into wind and solar. They are backed by the might of Brookfield Asset Management (BAM).

However, the yieldco industry was stained by the bankruptcy of Sun Edison in 2016. The company loaded up on debt and went bankrupt, and it had a major negative effect on its two yieldcos: Terraform Power and Terraform Global. Brookfield ended up buying TerraForm Global at a discount.

The key risk for yieldcos is that if management loads up on debt, the whole structure can collapse. In addition, yieldcos give most of their cash flow to their investors as dividends, so to generate new capital for growth they generally have to issue new shares. This means that if their share price declines, it can seriously hurt their capacity to generate new capital, leading to a liquidity trap.

Another way to reduce risk is to buy ETFs that focus on renewable energy for instant diversification.

While you’re still subject to the risks of renewable energy in general, it protects you from the risks of investing too heavily in any individual company.

Here are some of the top ETFs available: 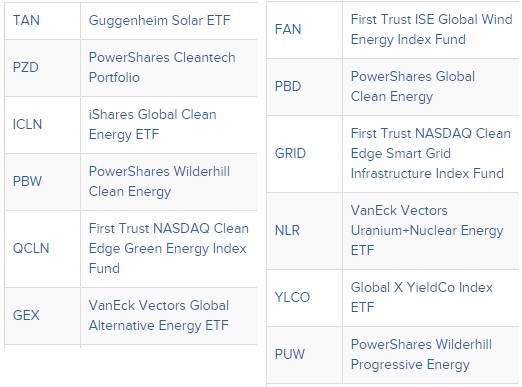 You can pick one that suits your goals.

The Guggenheim Solar ETF gives you broad exposure to the solar industry, including all the names mentioned above. The iShares Global Clean Energy ETF gives you exposure to solar, wind, and other renewables. The Global X YieldCo ETF gives you access to a big collection of all the top YieldCos.

The downside to this approach is that you’ll be investing in both winners and losers. Some of the under-performers will drag the indices down compared to how some of the strongest names will likely perform.

Plus, most of these ETFs are weighted by market cap rather than equally-weighted, which means they invest more heavily in the most highly-valued (sometimes overvalued) companies. 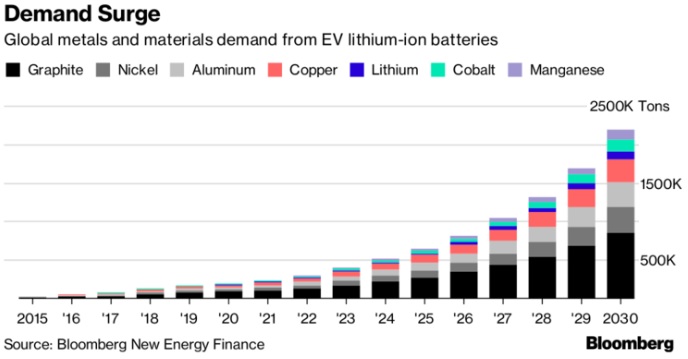 The iShares MSCI Global Metals & Mining Producers ETF (PICK) can give you broad exposure to metal miners, but the bulk of production is not focused on rare earth metals.

I like Norilsk Nickel (NILSY), since it’s the cheapest producer of nickel in the world and has exposure to copper and other metals as well. It pays a great dividend, but there are risks associated with Russian politics, and they have to spend a great deal of money in the coming years to improve their environmental standards.

I personally am investing in silver in a variety of ways. Silver is currently very cheap by many historical metrics, but is used in solar panels, electric vehicles, various electronic devices, and so forth. It’s one of the most important metals for a renewable economy.

Renewable energy doesn’t have to be a part of every investor’s portfolio.

Just by holding a set of broad index funds, and perhaps a few blue chip dividend stocks and other asset classes like real estate or precious metals, investors can have exposure to the global market and all the changes associated with it over the long term.

However, for enterprising investors with higher risk tolerance that want direct exposure, the renewable energy industry is a huge area of growth. I personally hold some exposure to Brookfield Renewable Energy Partners (BEP), SunPower (SPWR), and First Solar (FSLR), but only as part of a diversified portfolio.