There are two main approaches to asset allocation: strategic and tactical.

Strategic asset allocation picks an approach, and sticks with it through business cycles. For example, an index portfolio that is constantly 40% domestic stocks, 30% foreign stocks, and 30% bonds would be an example of strategic allocation. It will never be the best performing thing at any time, but it will also never be the worst performing way to invest.

Tactical asset allocation, on the other hand, attempts to improve returns or reduce risk by making changes based on market conditions. For example, during the heights of the dotcom bubble, a tactical portfolio manager might say, “stocks are too expensive, I’m reducing my exposure”. This can outperform the market but if done poorly can underperform.

It’s important to have a strategy that gives good returns and also matches well with your personality so that you can stick with it.

Every business cycle has its own unique properties, and lasts for a certain amount of time that is difficult to predict.

But, detailed research by Fidelity Investments has shown that business cycles tend to follow certain patterns. Investors can try to use those patterns to outperform the market, with the risk of course being that they could mis-time their investments and end up underperforming instead.

For one, the stock market cycle tends to be ahead of the economic cycle: 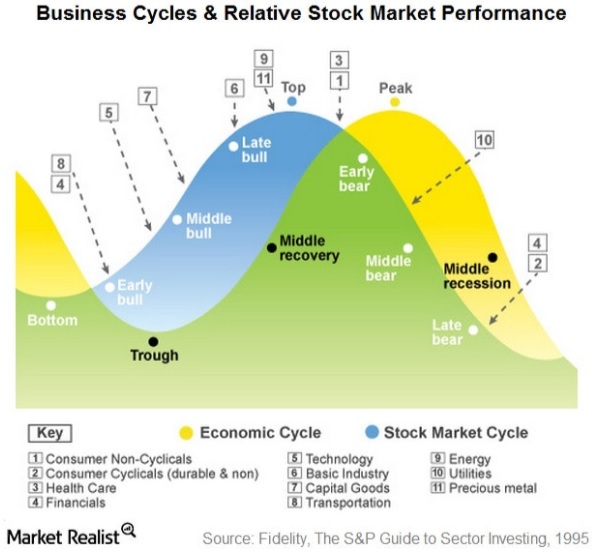 In other words, the stock market historically tends to peak and start to fall several months or a year or two before the economy itself starts to contract in a recession. Tactical asset allocation approaches often start making a portfolio more conservative as more signs appear that the business cycle is reaching its final stages.

Secondly, various political and economic aspects tend to occur in each phase:

Third, certain sectors tend to underperform or outperform in various stages of the business cycle. Not every time, but most of the time.

For example, commodities (energy and materials) historically outperform the S&P 500 80%+ of the time during the late phase of the business cycle: 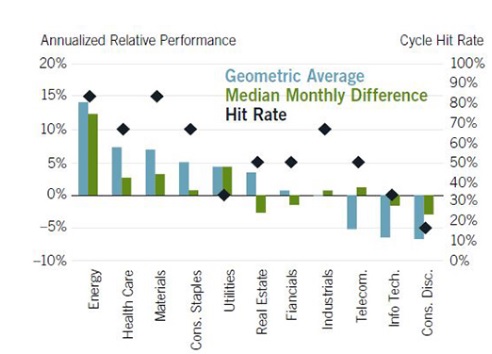 Read Fidelity’s report to see what usually underperforms or outperforms in all phases of the business cycle, if you’re interested.

Are We In the Late Phase?

In the previous newsletter issue, I gave an overview of many recession indicators showing that, by most standards, we are probably late in the business cycle but likely not with a recession on the imminent horizon.

This has been the second-longest bull market in history, stock valuations are high, unemployment is low, interest rates are rising, the yield curve is flattening but not yet inverted, corporate debt is quite high, and the purchasing manager’s index is strong. Read that previous issue for details. 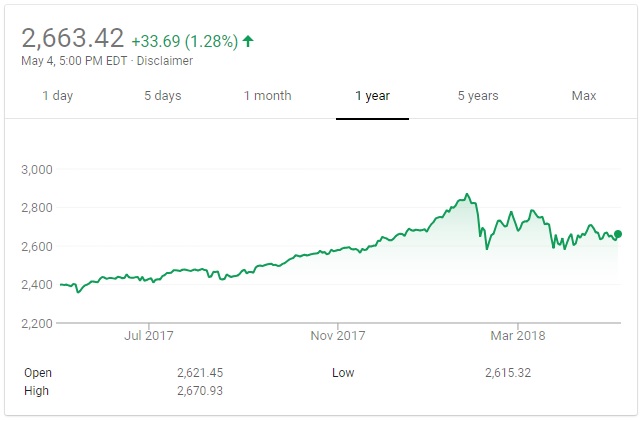 There’s a strong case to be made that we might be in the phase where the U.S. stock market has already peaked and is in decline, while the economic cycle still has a bit more to go towards its peak and then decline.

But there are two main alternative options:

And when we do have a recession, well, it could be another brutal one. While signs show that the banking industry is quite solid this time around, there are several other economic bubbles that are set up to really hurt the middle class.

How I’m Investing These Days

I don’t put much faith in stock charts or trends, because the number of variables that go into market movements is immense. There’s economics, politics, human psychology, valuations, and countless variations and sub-variables of those.

Instead, what I mostly look at is valuation. I try to buy things that are cheap, and occasionally sell things that get too expensive.

For my main retirement account, I’m still just adding money each month into a diversified set of low-cost index funds. For my other accounts, I’m more active.

This chart is a bit dated, but right now commodities are historically cheap compared to the S&P 500: 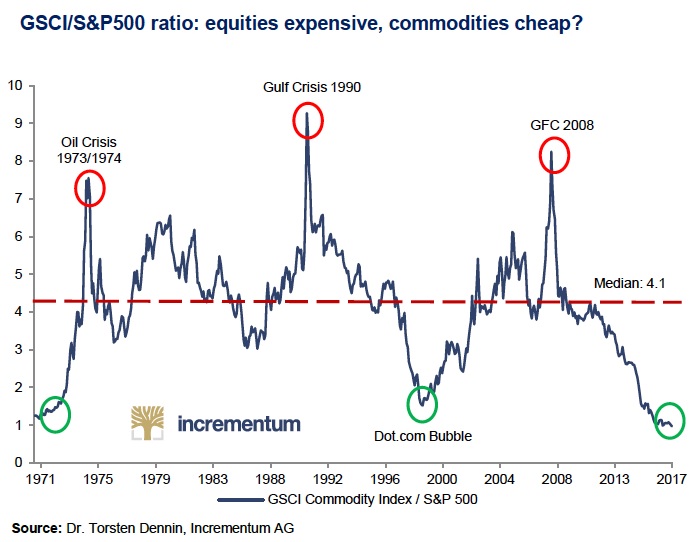 For a more recent graphic as of this quarter, commodities are still about one standard deviation below their average prices over the last ten years: 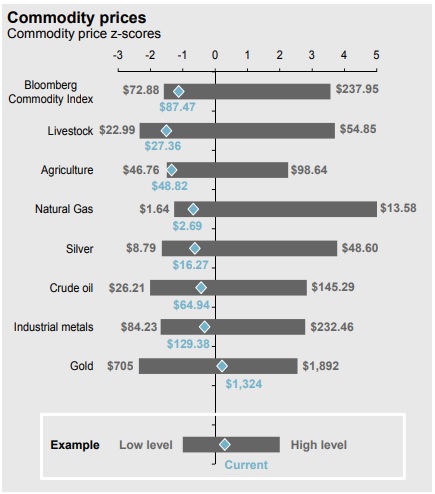 The one I have my sights set on in particular right now is Spectra Energy Partners LP (ticker: SEP); a business I have followed for many years and invested profitably with in the past. They’re a major natural gas pipeline business, and I may initiate a position.

Even in the most bullish outlooks for renewable energy, natural gas in particular still plays a major part in the global energy mix going forward. Natural gas is good for reliable winter heating, and gas stoves are much better than electric stoves for people that like to cook (myself included).

Spectra Energy Partners recently eliminated its Incentive Distribution Rights (IDRs), which is an awesome step for improving their capital structure and self-funding ability. Their IDRs were the big thing holding me back from making an investment this past year.

In addition, due to a recent Federal Energy Regulatory Commission (FERC) decision that negatively affects the taxes of interstate pipeline MLPs, SEP has seen a big stock/unit price decline from about $42 to $32, and several analysts set lower price targets on the units. SEP, however, announced that they don’t expect a material impact on their short or long term performance. While I think that’s too optimistic, there’s little reason to believe the tax changes would reduce the true value of the business by 25%. 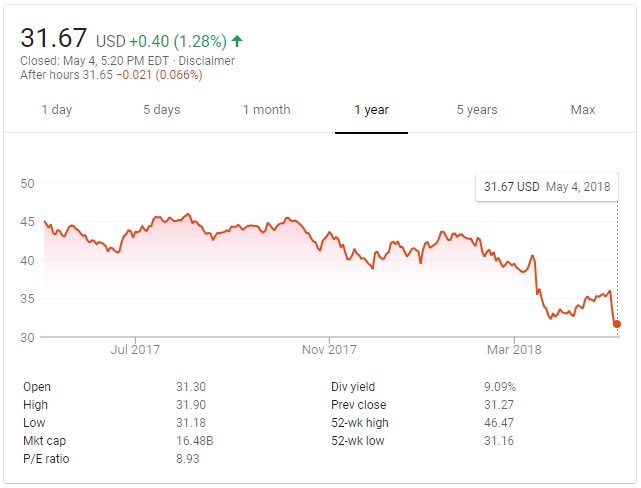 Rising interest rates will gradually increase their debt expense as they issue new bonds, which isn’t great. But with a strong balance sheet, they can weather it well. I personally like to make my portfolio interest-rate neutral, meaning I buy shares of banks and insurers (that benefit from gradually rising rates), and also hold some asset-heavy infrastructure businesses (which use leverage, and therefore prefer lower interest rates).

Morningstar has a 5-star rating on SEP, with a fair value estimate of $48 compared to the current price in the low-$30’s. I’m quite bullish at current prices as well, but only because I’m willing to hold it, collect the 9%+ distribution yield, and potentially wait years for the value to unfold itself rationally. What its price will do over the next year or two, I have no idea.

Be aware that SEP is about to announce earnings on May 9 after the market closes. May 9th and May 10th could be volatile days for the stock, with a big dip or big gain. All MLPs all have a degree of risk due to leverage and slow growth, so this is a contrarian buy-and-hold idea for enterprising investors and not necessarily great for newer investors or investors that don’t have broad diversification already. Here’s their investor presentation: (PDF).

Occidental Petroleum (ticker: OXY) is one of the better oil producers to buy in my opinion. Going forward, if you do invest in oil, I think it’s important to stick to oil producers that a) have strong balance sheets and b) have access to the lowest-cost sources of oil. Occidental’s strong presence in the Permian Basin (lowest oil costs in the U.S.) gives it a strong long-term position relative to other oil producers, and their balance sheet is solid.

There are good reasons to have a positive long-term outlook on emerging markets at current valuations. Although the details differ by country, emerging markets generally have faster growth rates, less debt, and lower stock valuations than U.S. companies right now. A good combination.

They also have more volatility, which scares some investors but is good for long-term contrarian investors. If you can focus on the long-term, ignore big market swings in the short-term, and are prepared to increase your position during major declines, then I think this is a good area these days.

Ten years ago, emerging markets were highly-valued, and since that time their profits have continued to go up but their valuations have come back down, resulting in a decade of choppy sideways performance. Now that emerging markets are reasonably valued once again, I think they have a strong foundation for outperformance over the next decade, even if they’re likely to encounter a big dip during the next global recession.

I recently wrote an article for Federal News Radio which talks about the importance of emerging markets.

I’m currently writing a big PDF report about international ETFs, analyzing valuations of each major country, so look for that as well if you’re interested.

Market volatility is higher these days than it was throughout 2017:

That means that option-selling is more profitable, because the premiums are higher.

If you want to have a lower cost basis on your investments (which offers some protection during bear markets), or want to make a lot of income and good returns during choppy sideways markets, and still want to participate partially if there is a bull market, then this is a decent time to be an option-seller.

My primary retirement account is purely indexed, and currently consists of about 40% U.S. stocks, 20% international stocks, and 40% short-term bonds and cash.

From 2009 through 2016 it was more aggressively positioned in equities that enjoyed a long bull market, but in 2017 I began dialing back my equity exposure a bit due to high valuations. I’ll significantly increase my equity exposure if/when valuations decrease substantially.

In addition, I have two other accounts that I make more active investments in, including individual stocks, ETFs, and options. Here is their combined summary: 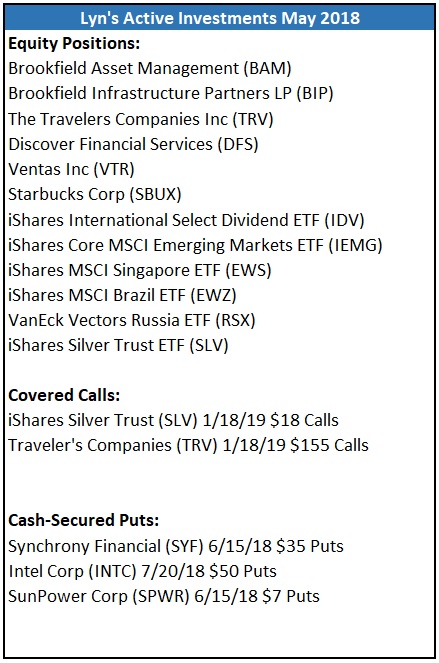 , which makes everything easy.

Changes since the previous issue:

-I sold $7 puts on SunPower Corporation.

-My covered calls on Intel were exercised, so I sold those shares profitably. Then I sold another set of puts to get paid to wait to re-enter the position. (Intel has a wide moat, but often has long choppy sideways volatile performance, making it good for option-selling for income).

-My puts on Starbucks and Discover were exercised, so now I hold shares of them.

It takes a few minutes per newsletter to manage, and helps show where I think value is in the market without focusing on individual securities.

You can see the previous version from the March issue here. 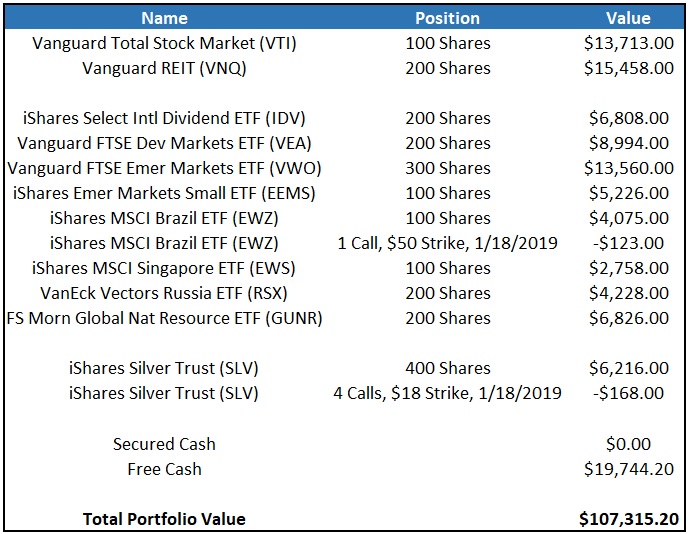 In my opinion, this is an especially important time to be diversified, both in terms of geography and asset class.

The U.S. economy is somewhere in the late-cycle phase, but exactly how far along is difficult to say. Stocks are highly valued, but not quite as expensive as they were before the correction earlier this year (which let off some much-needed steam). Tax reform and buybacks are boosting earnings, but corporate debt is near its historical peak levels.

For my active portfolio, I’ll be counting mostly on option income and dividend income for most of my gains, rather than relying on stock price increases. I’ll keep an overweight position in emerging markets, will have a bit of precious metal exposure, and will keep focusing on beaten-down sectors, especially those with nice dividend/distribution yields.

Have a great summer,