I’ve been observing an interesting phenomenon over the past five weeks.

You see, up until that time, I started to see a lot of investors and commentators correctly point out how highly valued the stock market was becoming. There’s a common trend where people tend to be euphoric at market tops and pessimistic at market bottoms. But I was seeing many people, despite being at a high market valuation, starting to become concerned, and rightly so.

And then Trump won the election.

Although financial speculators predicted a market sell-off if Trump were to win, the exact opposite occurred. We’re now 5 weeks into what’s been termed the Trump Rally.  We’re hitting new record highs for the S&P 500, DJIA, and Nasdaq.

Every bit of pessimism is gone. Barron’s is bullish.  Sentiment on Seeking Alpha is bullish. CNBC is bullish. Everywhere I look, people are bullish.

Sometimes they point to real reasons, like how the GOP-controlled Congress and Trump will likely cut corporate tax rates, which will then boost corporate net earnings. That’s certainly a reason for a stock rally.

However, it’s important to look at the numbers. The current federal corporate tax rate is 35%, which may go down to 15% according to Trump’s proposals. That seems major, but in reality, most corporations aren’t paying anywhere near 35% after all the tax credits and complexities they have.

According to a report earlier this year by the Government Accountability Office, a full third of large US corporations pay zero federal income tax. The average federal effective tax rate for profitable corporations is between 15% and 20%.

Considering the fact that corporations are already paying nearly as low as 15% tax rates (and some of them far lower), a tax cut to 15% won’t be a big change for many companies, unless they also get to include deductions and bring their effective tax rate even lower, like down to 5% or 10%.

State corporate tax rates can’t be changed by the Trump administration. They range from 5-10% in most states.

Long story short, upcoming corporate tax cuts may benefit some corporations but it’s not enough justification for market euphoria, because it’s not as broad or as impactful as it may seem on the surface. And if we have a scenario where corporate tax becomes 15% across the board with no loopholes, some companies would actually pay more than they are now.

The way I see it, people were waiting for an excuse, some reason to let go of their fears. Trump gave that to them. He’s pro-business, but propping up stock valuations to record levels isn’t warranted yet.

A common fallacy that people make when buying heavily into market tops is, “it’s different this time”. They explain why valuation doesn’t matter, or why tried-and-true valuation metrics aren’t right this time, etc. 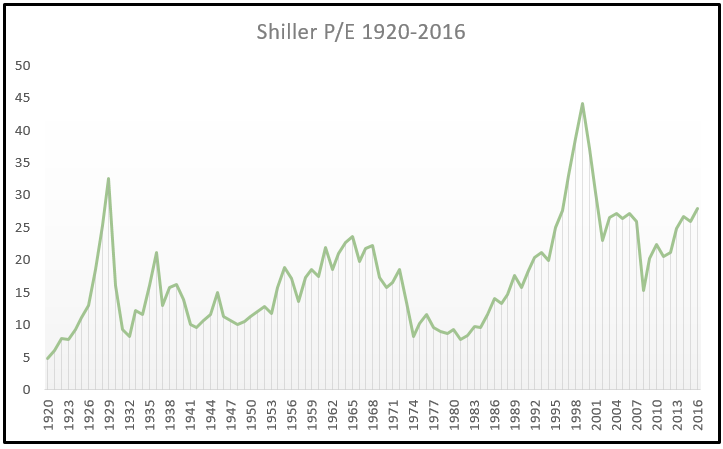 The only other times in the history of the United States that it has ever been this high, were:

In other words, it’s only been this high twice, and both times what happened next was awful.

The metric that Warren Buffett favors, the US market capitalization divided by the GDP, currently is over 126%. He considers it overvalued any time it’s above 100%. 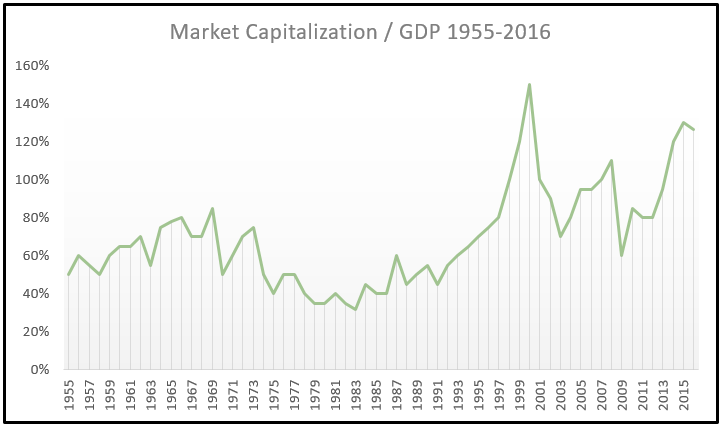 You can find more information about these market-wide valuation metrics here.

And if you don’t put a lot of faith in these valuation metrics, you can roll up your sleeves and analyze the discounted cash flows of several major US companies to get a sample of how expensive their stocks are right now. (The answer is many of them are demonstrably expensive.)

We’re due for a recession eventually, and stock prices are at near-record valuations, only matched by 1929 and 1997-2002. That’s a scary combo.

But here’s the thing.  None of us can predict when that inevitable recession will occur, or when the market may crash down to normal valuations for another reason. If I was writing this back in 1997, I would have been writing, “the market valuation has never been this high since 1929!”, and yet the market would have taken nearly 3 more years before it reached its peak and fell.  It stayed overvalued for quite some time, and went on to record levels before crashing back down.

Who knows.  Maybe 3 years from, the market will still be expensive. Or maybe in six months it’ll crash.  Nobody can tell.

But what we can tell, simply, is that the market is expensive. People are paying a lot of money per dollar of actual earnings and cash flow.

So, my personal portfolio, as well as these sample portfolios, are prepared for either scenario. I’ll focus on tactics that make money in a flat market. I’ll sell put options on wide-moat stocks to get paid to wait until stocks dip, and I’ll sell some in-the-money LEAPS puts as well.  I’ll benefit if there continues to be a bull market, and I’ll have some downside protection in the event of a market crash.

I’m purposely overweight REITs in both portfolios, because they finally came back down to earth. They were overvalued months ago, but came crashing down due to the threat of higher interest rates, which finally made them reasonably priced. Not undervalued, but reasonably valued. I’m also heavy into MLPs/refiners, and some blue chip wide-moat technology stocks.

Lastly, although gold is still kind of expensive, silver is pretty cheap, based on historical norms.  Silver has increasing demand in both industry and as a precious metal, and it’s my preferred metal at the current prices. I’m option weaving into both of them; generating income from them and using them as a place to store some value outside of equities. The stock portfolio just has some silver, while the ETF portfolio has some silver and gold.  (In the form of the SLV and GLD ETFs).

After today’s moves described in the previous newsletter, here’s the updated portfolio: 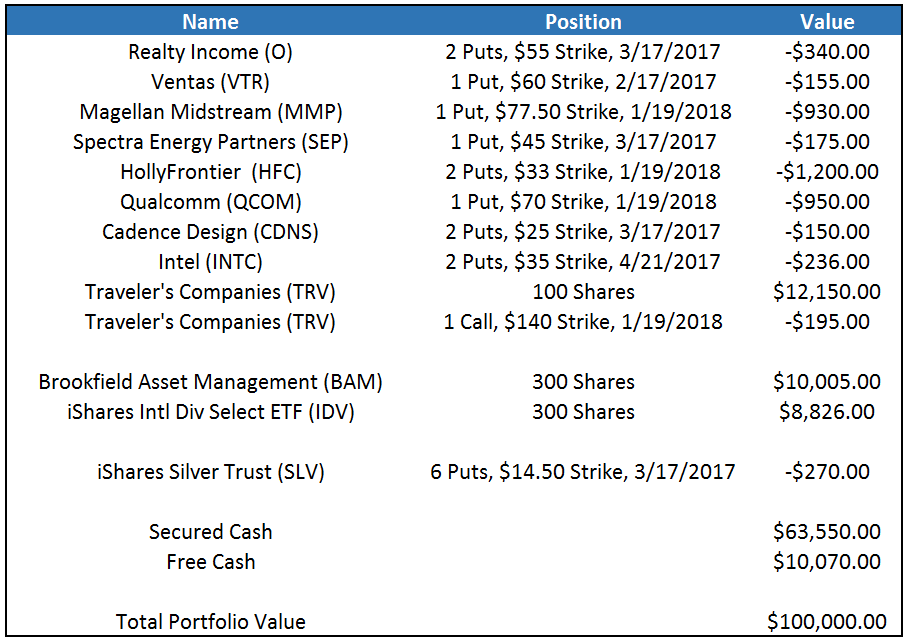 And here’s the updated ETF portfolio: