The S&P 500 continues to be highly valued when measured by the cyclically-adjusted price-to-earnings ratio (CAPE) and market capitalization to GDP (Market/GDP).

If you want to learn more about those valuation metrics, read this CAPE tutorial.

The healthcare sector is fairly cheap, because there’s a lot of investor uncertainty about how the Trump Administration and GOP Congress will likely repeal the Affordable Care Act without a current known replacement. Without having a clear idea of what their replacement is (and they are not unified on the matter), it’s hard for investors to gauge what companies would benefit or lose from such a decision.

Interestingly, the volatility of the S&P 500 is at historic lows:

Literally about as low as it gets.

It means the market is in broad agreement about pricing, and investors aren’t nervous.

Volatility itself is historically not a strong predictor of market movements. It was very low in the mid-90’s, which was followed by a long bull market. But, it was also very low in 2007, right at the top of the housing bubble when investors and even the vast majority of finance professionals were blissfully unaware of what was about to happen, regardless of how pedigreed their finance credentials were.

And now volatility is super low again, while we have historically high market valuations and when we’re 92 months into the third longest bull market in US history.

There are all manner of risks facing us, yet volatility is low, and I don’t believe the market is correctly pricing risk in at the moment. There’s not a lot we can do about it other than be cautious and make sure we’re diversified. I’m personally limiting my exposure to equities at the moment. I’m still heavily invested in equities, but also building positions in other investments because stock prices are high and volatility is low.

Stocks on my Watch-List

In today’s highly-valued market, there are not a lot of names I’m excited about buying. There are, however, a few quality companies that have suffered in stock price even as the rest of the market has soared, and that’s where my attention is focused.

This is one I’m very interested in, and am adding a position to both my personal portfolio and one of this newsletter’s model portfolios.

They make a variety of apparel and footwear, including Wrangler’s jeans, Lee’s jeans, The North Face outerwear, VANS skater sneakers and outerwear, and several brands that collectively control about half of the US backpack market.

Still, this company doubled their revenue and income over the last ten years, and has grown their dividend for 44 consecutive years, straight through every recession it has faced. Morningstar rates it as a 5/5 star stock based on its current valuation, and I’m in agreement.

This article by Chuck Carnevale provides a deeper look at it if you’re interested. He wrote that a few weeks ago and it’s only gotten cheaper since then which further strengthens the case for the stock.

Here’s his Youtube video on the stock, from that article:

Infosys is a huge (190,000+ employee) software outsourcing and consultancy company based in India.

They have three and a half decades of operation, and are India’s second largest IT company. About two thirds of their revenue comes from North America.

The Trump Effect is clear here- Infosys is the posterboy (postergirl?) for outsourcing. And they are the largest employer of H1B visas in the United States, and they might end up having to pay much higher salaries for those positions if regulations are expanded in that area.

Democratic Congresswoman Zoe Lofgren introduced legislation to require that H1B workers in the US receive $130,000 in annual pay compared to the $60,000 current minimum.  Infosys averages a bit over $80,000 per H1B worker. This is an area where there may be a degree of bipartisan support, as certain Democrats and Trump himself are more in alignment on this issue than the bulk of the GOP. The outcome is uncertain.

Current news in India for the company is not great either. An employee named Rasila Raju, a young woman, was recently murdered at her desk while working alone over the weekend by a security guard that she criticized for stalking her. That’s causing a big reflection in the company and community about its internal security procedures and employees working alone over the weekend.

By just about any metric, the company is attractively-priced, as it has a P/E ratio of 15, a decent dividend yield, and good growth prospects. Operating margins, however, may come under fire from these political challenges.

The time to buy solid companies is during periods of uncertainty when valuations are low. I believe it may be worth a small position in a diversified portfolio at this point, especially when compared to how highly-valued the U.S. stock market is and how much understated risk exists in those high valuations as well.

There’s clear risk in Infosys, but it’s already priced in.  In contrast, there’s a lot of risk in the U.S. market which isn’t very well priced in, in my view.

Each month, I update two virtual portfolios for the newsletter; one that invests in individual stocks and virtually any type of investment, and one specifically for ETFs to keep it simple. Many of these security selections overlap with my real-money personal portfolio selections.

For the March newsletter, I will also be initiating a dividend growth portfolio as a third model portfolio, and the goal for that one will focus specifically on growing investment income.

The biggest news here was that Apple sued Qualcomm in China for $1 billion over their licensing model. That cut about 20% off of Qualcomm’s stock price, since investors don’t know how it will play out.

The core of the lawsuit is that rather than charging a flat fee for their technology (which is essential for mobile phones), Qualcomm charges a percentage of the whole phone cost. That way, cheaper phones pay less for the necessary technology, and higher-end phones pay more. As a maker of high-end phones, Apple doesn’t like that model.

Qualcomm is now demonstrably undervalued if their business model doesn’t get altered by this lawsuit. All the fundamentals are strong, and their price-to-earnings and price-to-cash flow ratios are very low. But this lawsuit threat is now dragging down their perceived value. Since it was a little over 6% of this model portfolio and it dropped by about 20%, the result is just a little over 1% loss to the portfolio. Put options helped mitigate the loss slightly, but it was a big enough drop to go well below the cost basis.

This was offset by strong performance by Cadence Design, precious metals, and pretty much every other holding. Beneficial option decay gave the portfolio a gradual boost throughout the month.  As a result, the portfolio is up slightly despite Qualcomm’s drama: 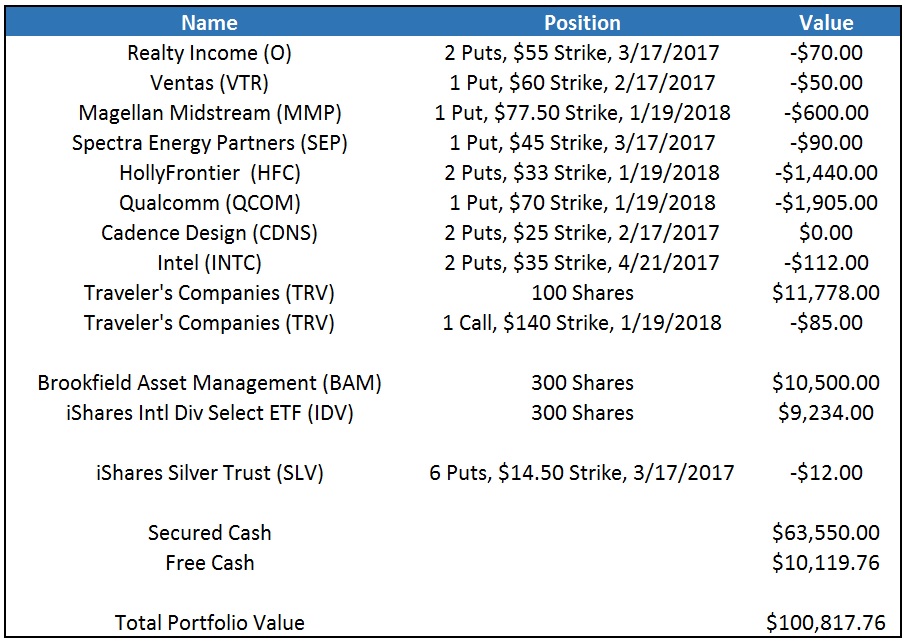 For more info about portfolio construction, see this tutorial on selling put options.

Long story short, my strategy is somewhat of a blend of dividend growth investing and a low-frequency option-seller, and I turn more towards the latter when markets are highly valued as they are right now.  It helps keep the cost basis of positions low and helps generate income in flat or overvalued markets.

And I recently published an article on Seeking Alpha about Traveler’s Companies. In this otherwise highly-valued market, it’s a reasonably-priced blue chip stock.

Portfolio actions this month, to be performed Monday:

All of these moves will use the closing prices on Monday, February 6th.

The ETF portfolio is up slightly.   It continues to benefit from the option premiums on RSP and VNQ, and IDV has performed decently.

I prefer the equal-weight version of the S&P 500 compared to the weighting based on market capitalization. It’s more diverse and more volatile, and historically offers better returns.  It gives good coverage for both large-cap and mid-cap companies. I plan on writing an article about equal-weight indices in the future.  Because the S&P 500 is highly-valued, I’m generating income from put options on it and waiting to buy during a market dip.

Portfolio actions this month, to be performed Monday: