I have concerns about the high valuation of the US markets.

I recently spoke with Brian O’Connell from the The Street to explain why, and here’s a snippet of what I said from the second page of the article:

“Mathematically, I believe the single biggest risk in 2017 is that stocks are historically expensive, and we’re 89 months into the fourth longest market expansion in U.S. history,” notes Lyn Alden, equity research specialist and the founder of Lyn Alden Investment Strategy. “Investors may be too bullish or euphoric late into the market cycle.”

Alden also notes the cyclically-adjusted price-to-earnings (CAPE) ratio of the S&P 500 currently stands near 28. “The only times in history the CAPE ratio was this high were for five months in 1929, preceding the market crash and for five years between 1997 and 2002 during the Dotcom bubble,” she states. “That’s not a good club to be in.”

To put it simply, with the CAPE ratio (aka Shiller PE ratio) of the S&P 500 being at 28, a century of historical data shows us that equity returns over the next 10-20 years likely won’t be good, since we’re already highly valued now.

I don’t try to predict the timing of any events.  I just note what’s expensive and what’s cheap, and then invest accordingly.

I’m talking strictly long-term here, even though he asked about the biggest risk of 2017. High or low market valuations can’t tell us what will happen in the short term, or even for a couple years. Rather, a high market valuation simply tell us that:

I provided more detail on this in my previous newsletter issue, and discussed why the prospect of corporate tax cuts is not significantly altering my valuation assessment of the market.

I’m still heavily invested in the US, but I’m taking precautions against the prospects of lower long-term returns or the possibility of a correction at some point. Specifically, I’m keeping my cost basis lower than current market prices by selling put options, and I’m investing in REITs more now than I did earlier in the year. I’m also looking abroad more aggressively, and particularly at the UK.

My portfolio is designed to maximize income and returns even in the face of a flat or bearish market, while still doing well in a bull market.

In this issue I’ll discuss why I’m currently in favor of REITs and the UK market, and then give you updates on my virtual portfolios at the end.

Why I’m Putting Money into REITs

As I wrote about in this recent article, Real Estate Investment Trusts experienced a sell-off in mid-2016 after being overvalued. The main reason for the sell-off was that investors became spooked by the possibility of rising interest rates.  REITs use quite a bit of leverage and so they’re sensitive to changes in interest rates. Plus, if bond yields go up, yield-hungry investors may take money out of REITs and invest more heavily in fixed-income, which could further drive down REIT prices.

I fortunately didn’t have any REIT exposure in mid-2016 when the sell-off started (I was not holding them at the time because they were too highly valued, precisely to avoid that type of risk), but now that their valuations have cooled off a bit, I’ve added REITs in my personal portfolio. And if REITs drop even further, I’ll buy more. I’m in them for the long-haul as long as they remain reasonably priced.  They’re not undervalued as a sector, but they’re reasonably valued compared to what a lot of the alternatives are.

Specifically, I like Ventas, Inc. (VTR) at these levels, for example. They’re a healthcare REIT, and about three quarters of their real estate assets are in senior housing and medical offices. The other quarter of their portfolio is split into life sciences buildings, hospitals, and skilled nursing facilities. It has a dividend yield of 4.95% (compared to only 2% for the S&P 500 average), has increased the dividend by an average of 9% per year over the past ten years, and has a solid balance sheet. The most recent dividend increase was about 6.1%.

Even better, I like selling puts on Ventas, and that’s what I’ve done in my personal portfolio.

As of this writing before the market open of Jan 5th, shares currently trade for $62.61, down from over $76 this past summer when it was overvalued, and you can sell put options that expire in six weeks at a strike price of $60 for $1.10 in premiums. This translates into a 1.86% return in six weeks if not exercised, or 16% annualized. If, on the other hand, VTR dips in price within those six weeks, the options will be exercised, and you’ll buy shares for an effective cost basis of just $58.10, which is about 6% below today’s market price.

If you stick to ETFs rather than individual stocks, Vanguard’s VNQ REIT fund is a decent pick, and another solid choice for selling puts. For example, while shares currently trade for $84.01, you can sell puts that expire in six weeks at a strike price of $83, and receive $2.05 in premiums. If the options are not exercised, you’ll have a return of over 2.5% in six weeks, which would be about 22% annualized.  If, on the other hand, the shares dip to under $83, you’ll buy at an effective cost basis of $80.95, which is 3.6% below today’s market price.

If I weren’t an option seller, I’d just put 10% of my portfolio in REITs for now and adjust when valuations change significantly.

Why the United Kingdom Looks Attractive

While the CAPE ratio of the US market is nearly 28, UK’s is only half that at about 14. Investors are currently only paying about half the price for UK shares as they are for US shares, when compared to the last ten years of inflation-adjusted earnings.

This chart by StarCapital shows the current CAPE ratios of different markets around the world, and as you can see, the UK is among the cheapest developed markets right now.  And here is more info by Siblis Research about the CAPE ratio of the FTSE 100 (Uk’s primary stock market index).

Overall, the US market deserves a valuation premium over the UK market, because it’s more diverse and more forward-oriented.

For example, the top ten holdings of the US’s S&P 500 consist of a mix of tech stocks (Apple, Microsoft, Amazon, General Electric, and Facebook), financials (Berkshire Hathaway, JP Morgan), rounded out by some oil, healthcare, and telecommunications (Exxon Mobil, Johnson and Johnson, and AT&T). And that’s a pretty good representation of the rest of the index; plenty of tech, energy, financials, healthcare, and everything.

In contrast, the UK’s top ten holdings mainly consist of oil (Royal Dutch Shell A-class, Royal Dutch Shell B-class, and BP), financials (HSBC), tobacco and alcohol (British America Tobacco and Diageo), along with some healthcare (AstraZeneca and GlaxoSmithKline), and a telecom and consumer goods company to round them out (Vodafone, Reckitt Benckiser). All-in-all, technology makes up only 1% of the entire FTSE 100 by market capitalization, which is unfortunate.

However, I don’t believe the US market deserves two times higher valuations than the UK market. The US market is historically overvalued compared to 130 years of CAPE data, while the UK market is mildly undervalued based on its history.

John Kingham, a UK-based value investor with a great track record, has an article about the fair value of the FTSE 100, which you can read here. My favorite part of that article is his chart that shows the CAPE ranges compared to where the FTSE 100 index currently is.

That article is about six months old, but it’s still useful, and we can update the figures right here.  The FTSE 100 currently stands at less than 7,200, with a CAPE ratio of about 14. This puts it on the moderately low end of its historical valuation, and far lower than the valuation of many other markets worldwide.

How to Invest in the UK

The Vanguard International High Dividend ETF (VYMI) has 16% of its assets in the UK, and has a 0.30% expense ratio.

While I don’t believe either of these are screaming buys, I like them better than the US market at these current price points.

It may be a good time to put new money into a UK or international fund, or re-assess how weighted you are in the US and see if it’s time to rebalance some capital.

A couple final points on other matters:

Each month, I update two virtual portfolios for the newsletter; one for individual securities and one for ETFs. Many of these security selections overlap with my real-money personal portfolio selections.

The only changes compared to last month were that some options and stock prices fluctuated slightly, and the portfolio received $0.165885/share in distributions from IDV which was added to the free cash position. I also corrected the date on CDNS’s put from 3/17 to 2/17, which was a typo on last month’s chart. 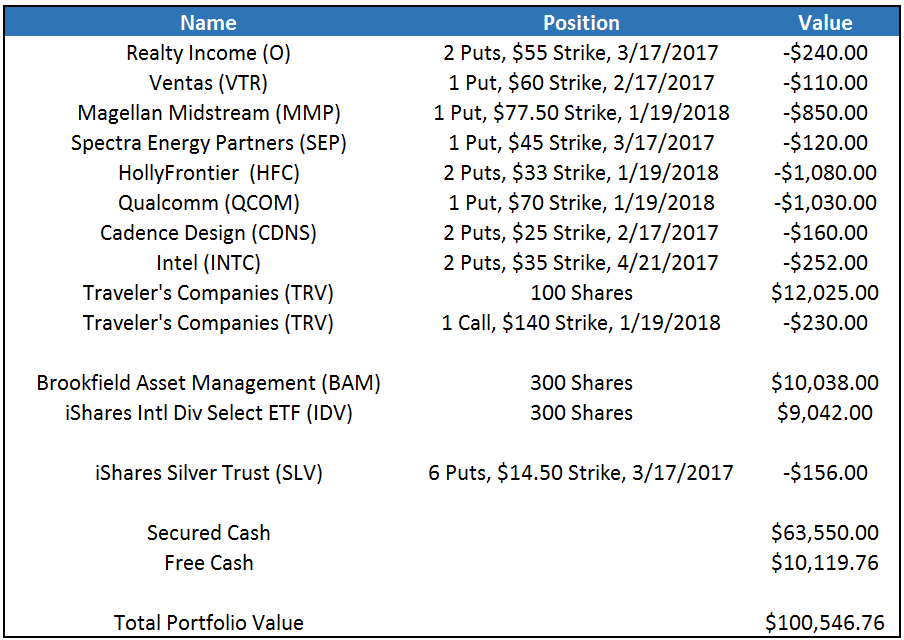 There are no changes for this month, over than adding IDV’s distribution to the free cash value.