That’s because in addition to analyzing the quality of the business and the expected earnings and cash flows it may produce, investors need to consider the price they’ll pay for it.

Regardless of how popular a growth stock is, it doesn’t make sense as a long-term investment if its price gets too high relative to its fundamentals.

A Lesson From Howard Marks

One of my favorite investors of all time is Howard Marks, the billionaire co-founder of Oaktree Capital and world-renowned distressed bond investor. His performance is one of the best in the business and he is famous for his wise chairman essays.

I find that his investment advice applies well to all asset classes, including equities, and is worth listening to.

When he was first starting out in the investing world as a young man, Marks initially started in equities. Bonds were out of favor at the time.

Marks often points out in his interviews and speeches that there was a set of stocks in the 1960s known as the “Nifty Fifty”, which referred to the highest quality stocks in the market. These stocks, it was thought, were worth buying at any price. Coca Cola and other well-known stocks were among them. Many stocks in this group traded for well over 50x earnings.

As you may guess, most of these stocks went on to perform terribly over the next couple decades. They were significantly overvalued despite the fact that most of them were great companies and popular growth stocks. In the end, it’s earnings and cash flows that determine business value, and they exist in the real world rather than the dream world of high expectations.

Marks, fortunately, mostly skipped that area and ended up in the dark world of junk bonds. Junk bonds back then were unseemly, considered unsuitable for respectable portfolios, and so nobody wanted them. That kept demand low and thus made them incredibly profitable for prudent investors who bought at a discount.

Marks often tells the story of the 1978 edition of the Moody’s manual. The definition of a B-rated (junk) bond in that manual according to Marks was, “fails to possess the characteristics of a desirable investment.” In other words, junk bonds were by definition bad investments.

Marks thought, “yes, but at what price?”

Marks ironically went on to flourish and make great returns by investing in the debt of lower-quality businesses thanks to undervaluation, while the equity returns from high-quality businesses in that era suffered thanks to overvaluation. He managed his risk with a conservative and diversified approach while investing in an asset class that has a lot of inefficiencies.

I prefer to err on the side of a high quality businesses, but only if the price is reasonable. If I must be incredibly optimistic in my discounted cash flow analysis to justify the current stock price, I pass.

Currently I’m finding more bargains in value stocks than growth stocks, although there are some exceptions.

Right now, emerging markets are at one of the biggest valuation discounts to U.S. stocks in history, but investors aren’t too interested in them. Global growth rates are slowing, the dollar is strong, and U.S. markets have outperformed everything else, so that’s where money wants to be going forward as well.

Sometimes when I mention how cheap emerging markets are on an absolute and historical relative basis, people say, “yes but I avoid them because there is high corruption” or “they have a lot of export sensitivity to the U.S.” or “but when U.S. stock fall EM stocks fall even harder.”

It reminds me of Marks and junk bonds. Yes, emerging markets deserve a valuation discount. They should give higher returns in exchange for higher volatility. So, the question should be, “yes, but at what price?” Emerging markets were never this cheap relative to U.S. stocks when they had their biggest historical sell-offs.

In contrast, there are many stocks in the United States that investors want to buy almost regardless of price. They’re on a great trend, they’re of great quality, so we want to own them. But there’s the pesky problem of price.

Investing is often about managing probability distributions. It’s not just about what one stock might do; it’s about what a basket of stocks with certain characteristics is most likely to do.

I’ve been investing in Microsoft off and on for years, and they are doing very well lately. Ever since Nadella replaced Balmer as CEO, the company has performed excellently in the growing cloud market.

The problem is that everyone knows they’re doing great and capital is cheap and needs places to go, so the stock price has outpaced its fundamentals.

This F.A.S.T. Graph shows the price of MSFT stock (black line) relative to its fundamentals (blue and orange lines): 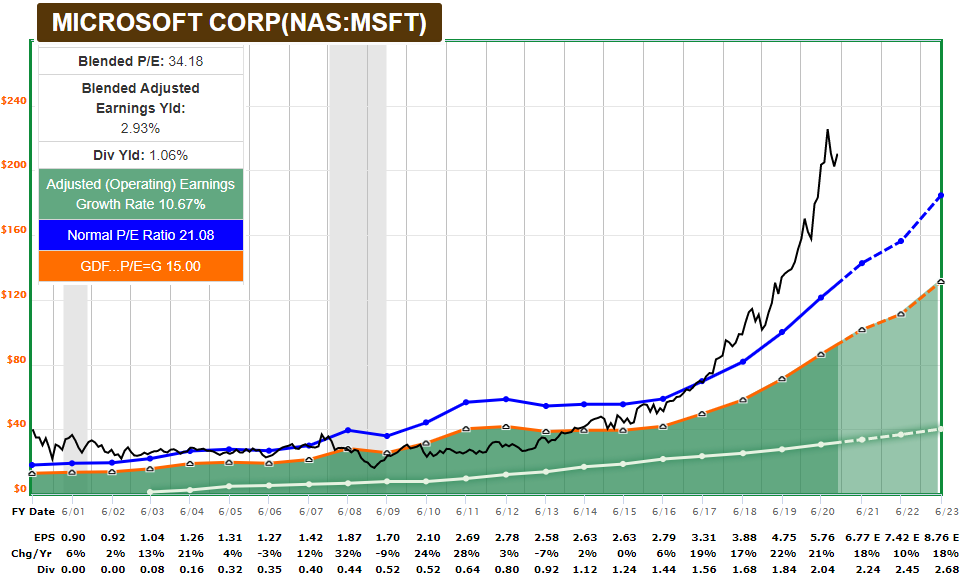 I still own it, and expect good sales and earnings growth going forward, but am not excited to buy more at this price point. I wouldn’t want it as a large position.

I’d need to see the stock fall 20-30% before it excites me again, or stay flat for a couple years as fundamentals catch up with price.

Adobe has benefited tremendously from its shift towards a cloud-based recurring revenue model, and it has plenty of room to expand and grow. Its market share is so dominant in some of its key markets that its brand name is synonymous with the task itself (e.g. to “photoshop” something). 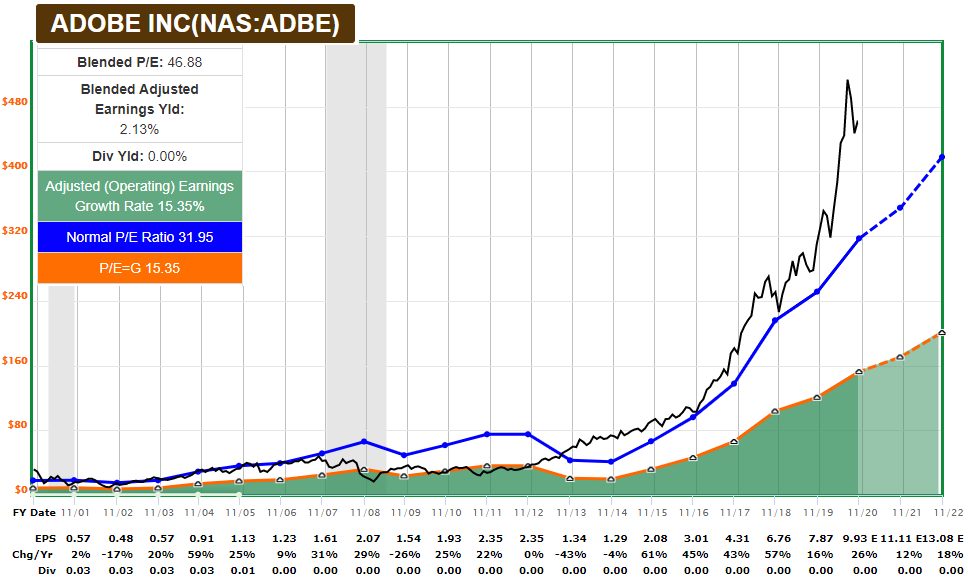 I’d need to see Adobe stock 20%-30% cheaper before initiating a significant position, or for the stock to go sideways for a couple years as fundamentals catch up with the stock. I bought a position in early 2019 and owned it for much of this recent run-up, but sold it in late 2020 as it no longer had attractive forward growth prospects.

Cadence offers a suite of electrical and computer design software for engineers. I’ve used some of their tools myself, during my engineering days.

They transitioned from a software sales model to a cloud-based subscription recurring revenue model, which gave them a strong uptick in growth. However, the valuation relative to forward growth expectations is now very high, so the stock doesn’t offer a lot of interest at the moment: 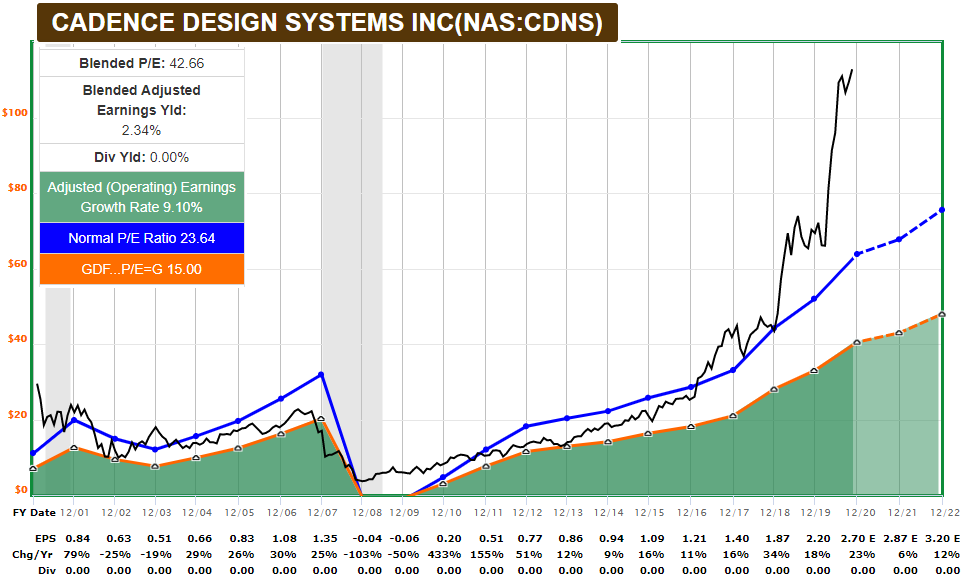 I’d need to see a 40% reduction in CDNS’s stock price to get interested in this stock, even though the company itself is doing great.

It pays to be picky when the market has priced growth stocks to very high valuations, especially compared to value stocks.

Growth stocks have outpaced value stocks for 13 years now. This has been a market where throwing money at the fastest-growing names has easily paid off, much like the 1990’s.

Going forward over the next several years, however, this trend might not continue so smoothly.

I’m investing with a bit of a value tilt now, where there are many companies trading at or below my estimated fair value. Additionally, ex-USA equities appear reasonably-priced, especially in the emerging markets. For this article, however, I’m focusing on reasonably-priced growth stocks.

An example of a growth stock I find value in is HDFC Bank of India. It’s not a screaming buy based on the numbers, but it’s a reasonable investment relative to the high quality and strong growth of the business: 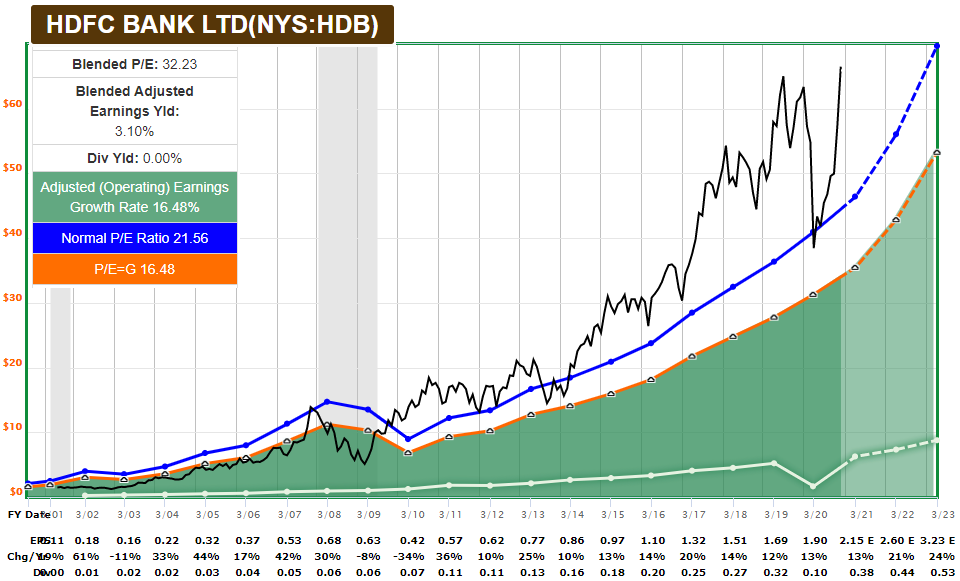 I wouldn’t be surprised to see a correction over the next 6-12 months, but overall, their valuation relative to forward growth prospects remains quite attractive, with a PEG ratio below 1x.

JD is one of the top ecommerce companies in China. They spent many years being unprofitable as they invested heavily in their logistics infrastructure throughout China, but now it’s starting to pay off: 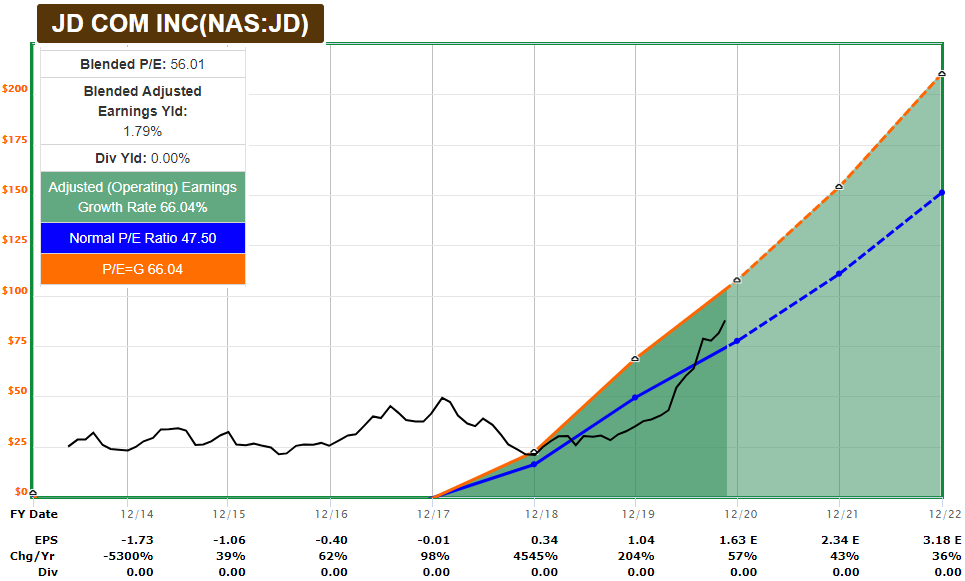 We can further clear that up by looking at operating cash flows: 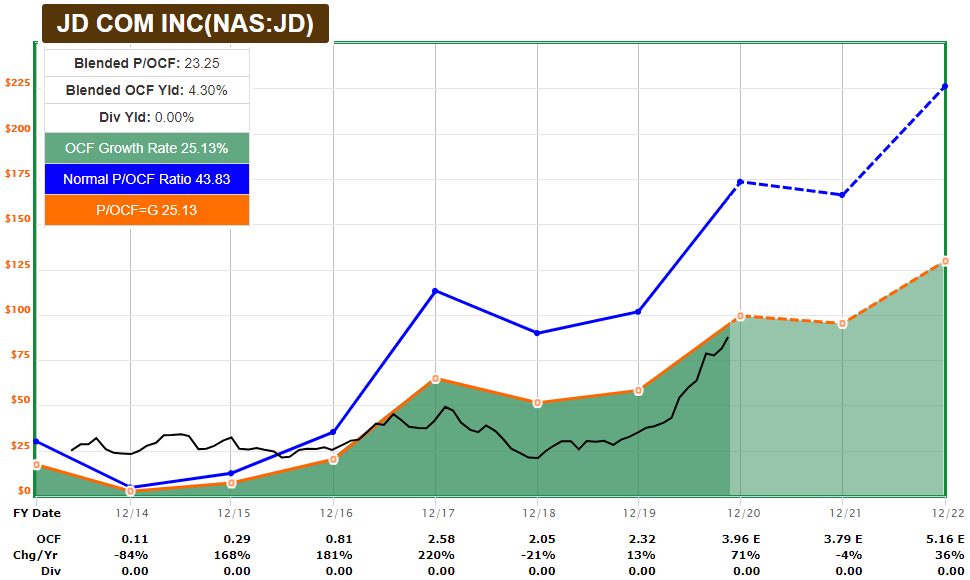 JD isn’t “cheap” by most metrics, but its potential growth rate over the next 5 years is tremendous, and the market cap remains relatively small for what it can become as a leading Chinese e-commerce company that is further branching into other business lines. I’m certainly happy to hold a small position at current prices and ride the volatility wherever it leads for quite some time, as long as the underlying fundamentals remain strong.